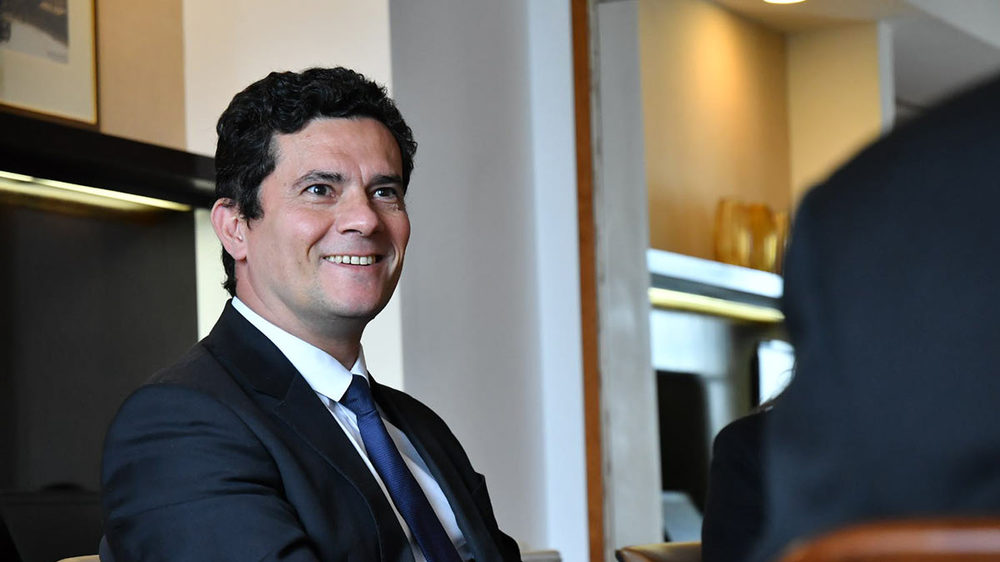 University of Notre Dame President Rev. John I. Jenkins, C.S.C., presented the Notre Dame Award to Brazilian Judge Sérgio Moro at a ceremony Oct. 2 (Monday) in São Paulo for his courageous efforts to preserve the “nation’s integrity through his steadfast, unbiased application of the law.”

“Previous Note Dame Award recipients, each in their own way, have been pillars of conscience and integrity, and whose actions benefited their compatriots, and by example, the whole world, as they committed themselves to faith, justice, peace, truth and solidarity with the most vulnerable,” Father Jenkins said.

“In Dr. Moro’s case, the University recognizes that he is engaged in nothing less than the preservation of his nation’s integrity though his steadfast, unbiased application of the law. By addressing the pernicious problems of public corruption in a judicious but diligent way, Dr. Moro has made a marked difference for all Brazilians and for humankind at large in our universal thirst for justice.”

Moro is a federal judge in the southern city of Curitiba who gained international recognition and commendation in recent years for his sentencing of powerful Brazilian politicians and business leaders on corruption charges. Most recently, as part of a four-year investigation of the state-controlled oil company Petrobras, he sentenced former Brazilian President Luiz Inácio Lula da Silva to nearly 10 years in prison.

Modeling his approach on Italy’s “Clean Hands” corruption investigation of the 1990s, Moro also has played an integral role in the “Banestado” case that led to the prosecution of 97 people on corruption charges, and Operation Farol da Colina, in which the judge called for the preventive arrest of 103 suspects for committing money laundering, tax evasion and other crimes.

The New York Times has labeled Moro “the face of the national reckoning for Brazil’s ruling class.” Fortune magazine ranked him 13th on its list of World’s Greatest Leaders, and Time magazine included him on its list of the world’s 100 most influential people.

Moro, 45, was raised in Maringá, a city in the southern state of Paraná. He earned a bachelor’s of law degree from Maringá State University and a doctorate from the Federal University of Paraná. He studied abroad through an exchange program at Harvard Law School in 1998.

Appointed to his current position in 1996, he participated in 2007 in the U.S. State Department’s International Visitor Leadership Program, visiting U.S. agencies and institutions responsible for preventing and combating money laundering.

Last presented in 2000, the University has relaunched the Notre Dame Award as part of its 175th anniversary celebration. It was first awarded in 1992 in conjunction with Notre Dame’s sesquicentennial and has been given to “women and men whose life and deeds have shown exemplary dedication to the ideals for which the University stands: faith, inquiry, education, justice, public service, peace and care for the most vulnerable.”

When I was in Brazil last year, I met with business leaders, educators, church officials, and Notre Dame alumni from all walks of life.

We talked at length about innovation, the importance of applied research and collaboration between business and the academy.  We talked about the great promise of Brazil, and the riches of its vibrant culture.

However, overriding those discussions in each of the universities that I visited here and in Chile and Argentina, was the importance of values and ethics – of how values must prepare graduates to cope with and combat the kind of corruption that has plagued society for generations.

No society is immune.

It was not long ago that five organized crime families in America’s largest city, New York, demanded tribute for the delivery of vital services. Garbage would not be collected unless the Mafia was paid. Restaurant linens would not be cleaned. Fresh fish would be left to spoil on the docks. When the city built high-rise apartment buildings for the poor, organized crime received $2 apiece for each of the millions of windows that were installed or replaced.

Worse than the added cost that corruption imposed on goods and services, was the levy it imposed on the character of elected officials, business leaders, and union officials. When they sold out, they squandered public confidence in government.

Decades of concerted efforts by Federal and local prosecutors and judges finally dismantled the five crime families in New York to a mere shadow of themselves.

I cite New York’s experience because I want to emphasize the fact that neither the United States nor any other nation is immune to corruption.

Entrenched corruption was making it almost impossible to earn an honest living.  Even decent people are entangled in this web of corruption that destroys dignity and self-respect. Brazil’s economy – Latin America’s largest and the ninth biggest in the world – was undermined by rampant corruption. The nation’s future was at stake.

Yet, in the midst of all this corruption, there emerged a young Federal judge to fearlessly confront corrupt and powerful political interests.

Sérgio Fernando Moro and his team have given new hope to Brazilians and to millions of people around the world who yearn for honesty in government.

As a result of Dr. Moro’s good work, Brazil, instead of being infamous for corruption, has become a beacon to the rest of the hemisphere on how to fight it.

For that reason, the University of Notre Dame has selected Dr. Moro to receive the Notre Dame Award.

Each, in their own way have been pillars of conscience and integrity, and whose actions benefited their compatriots, and by example, the global community.

The Notre Dame Award is given periodically to women and men whose life and deeds have shown exemplary dedication to the ideals for which the University stands:  faith, inquiry, education, justice, public service, peace and care of the most vulnerable.

Dr. Moro, I ask that you join me at the podium.

The University of Notre Dame is proud to recognize that you, Sérgio Fernando Moro, have engaged in nothing less than the preservation of your nation’s integrity though your steadfast, unbiased application of the law.

By addressing the pernicious problems of public corruption in a judicious but diligent way, you have made a marked difference in the lives of all Brazilians and in quenching humankind’s universal thirst for justice.