From the famous “Welcome to Fabulous Las Vegas” sign glowing green, to alumni and friends in volunteer service, to a pre-game Mass, to lots of blue, gold and green apparel on the Strip, members of the extended University of Notre Dame family made their presence known this past weekend in “the entertainment capital of the world.”

In advance of the Shamrock Series football game Saturday between Notre Dame and BYU — which the Irish won, 28-20 — the University hosted a wide array of events that Fighting Irish faithful could attend in between taking in other sights and sounds of the city.

Hundreds of fans from around the country joined with Notre Dame Alumni Association Executive Director and Associate Vice President Dolly Duffy and the Notre Dame leprechaun on Thursday evening on Las Vegas Boulevard South to light the iconic welcome sign that has greeted visitors to the city since 1959.

Also on Thursday, Santiago Schnell, the William K. Warren Foundation Dean of the College of Science, offered a TED-style talk at the University’s headquarters venue, the Bellagio Hotel and Casino, on how mathematical scientists have developed algorithms to reduce the advantage of bookmakers and make a 200 percent return from betting on sports.

Becker, an associate professor of film, television and theater, focused on the video production associated with the game, which she said has helped traditionalists among the alumni come to appreciate some of the changes – such as special uniforms – that have been a part of the series.

Walden, an assistant teaching professor of American studies, added: “A uniform is not just a uniform. It represents power, structure and identity.”

The two faculty members both spoke of the evolution of the branding of the series and the increasing use of social media as the primary communications channel.

Walden and Becker are among a dozen faculty in Notre Dame’s new minor in sport, media and culture.

Later on Friday, Notre Dame faculty and staff in the IDEA Center joined with counterparts at BYU to host the Innovation Rally/Startup Showcase, which featured four startup organizations from Notre Dame and three from BYU pitching their business plans and innovations to a panel of judges, potential investors, entrepreneurs and alumni. The $3,000 top prize was split between Drone Response, a nascent company developing drones to help save, protect and preserve the environment and human life, and ATCS, which has developed a light-weight and foldable ballistic protection barrier that can shield victims as well as law enforcement and other first responders from active shooters.

Drone Response will be featured in one of the University’s “What Would You Fight For” spots on NBC during the Notre Dame-Boston College football game Nov. 19.

To put an appropriate conclusion to the University’s pre-game activities, Notre Dame President Rev. John I. Jenkins, C.S.C., served as celebrant and homilist Saturday morning at a Mass at the Shrine of the Most Holy Redeemer.

Initiated in 2009, the Shamrock Series has brought the home football game experience to cities across the country. Each of the 11 iterations in eight cities has included many of the activities that fans would normally find on a home football weekend, including academic, faith, cultural, musical and other events, as well as the pageantry and action associated with the game itself. 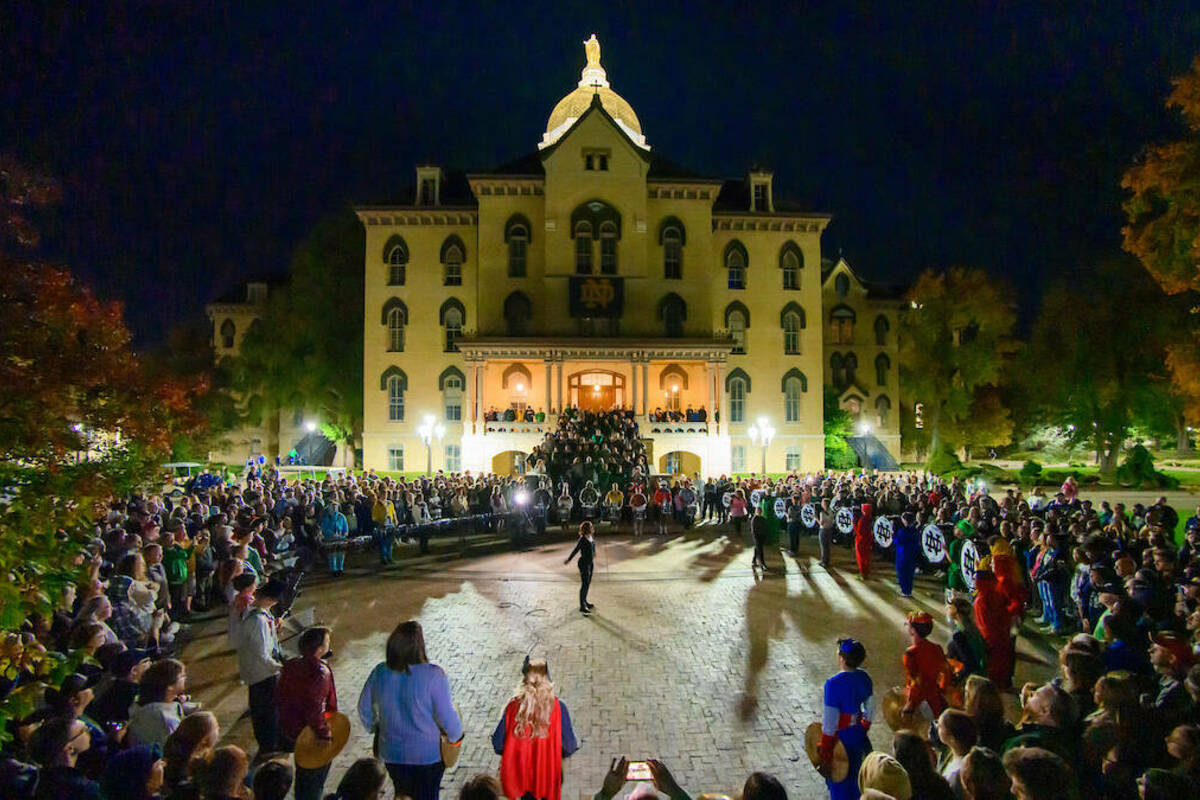