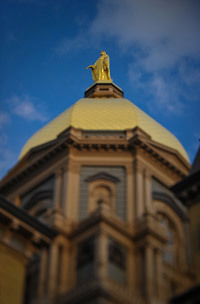 The Denny Moore Award for Excellence in Journalism was presented to Clara L. Ritger and Megan E. Doyle. This award is given to graduating seniors who exemplify the qualities of Moore, a former Notre Dame associate vice president, who was known for his integrity, character, commitment to Notre Dame and writing ability.

Ritger, a senior majoring in political science and theater with a minor in the Journalism, Ethics and Democracy program, served as editor-in-chief of Scholastic, Notre Dame’s student magazine. In the past four years, she has worked for 88.1 WVPE, the local NPR station; Northern Virginia Magazine; the Pennsylvania Legislative Correspondents’ Association; and USA Today. Awarded a Pulliam Fellowship, Ritger will start work at the Indianapolis Star after graduation.

Doyle has served as news editor and managing editor of The Observer, leading the paper’s coverage of the most important projects such as the LGBTQ issue and a series on the 40th anniversary of coeducation at Notre Dame. She will intern at the Pittsburgh Post-Gazette this summer through the Gallivan Program and then begin her career at the Concord Monitor in New Hampshire.

Classics student Michael A. Mercurio was given The Rev. A. Leonard Collins Award, honoring a graduating senior who has made substantial personal efforts to advance the interest of students at Notre Dame.

A four-year Morrissey Manor resident and current resident assistant, Mercurio has contributed to the Asian American Association as director of Asian Allure and spiritual commissioner, and has conducted an oral history project that involved interviewing Asian and Asian American alumni about their experiences at Notre Dame. He writes for Convos of Color on the intersection of faith and race, school choice, Native American mascots, and the language of empowerment in race relations. In fall 2012, he served as the student coordinator for the Freshman Retreat through Campus Ministry. He also co-founded the Classics Club and has been involved with the Filipino American Student Organization.

The John W. Gardner Student Leadership Award, given to a graduating senior who has exemplified the ideas of the University through outstanding community service beyond the University community, was awarded to Emily B. Conron.

Conron has worked for the past four years to found the Notre Dame Fighting Neglected Tropical Diseases student organization, the first initiative of its kind on a college campus. Her vision and commitment have resulted in official University recognition, extensive recruitment, and fundraising resulting in thousands of dollars for tropical disease relief and education. She has successfully linked this organization with the Notre Dame Haiti Program and the Eck Institute for Global Health, ensuring the continuation of these efforts after she graduates.

Michael A. Gillman was presented with the Sister Jean Lenz, O.S.F., Leadership Award. This honor is given to a post-baccalaureate student who has displayed leadership in promoting a more diverse, inclusive campus community for students.

A Law School student, Gillman’s career has been marked by community service and social concern. He has worked with the Center for Social Concerns Migrant Experience seminar, the Higgins Labor Studies Program and the Community Justice Project to improve and enrich the lives of immigrants and workers. Gillman has spent the past two years serving as a graduate leader providing innovative seminar experiences for students.

Adam E. Zebrowski was given the Ray Siegfried Award for Leadership Excellence, presented to a graduating senior who exemplifies the qualities for which former Notre Dame Trustee Ray Siegfried, Class of 1965, was known, including leadership, generosity, devotion to the Catholic faith and affinity for athletics.

Studying science and computing, Zebrowski has held leadership roles as president or captain of basketball, dodgeball, volleyball and bowling teams. He is founder and president of Notre Dame Club Baseball and previously served as Zahm House athletic coordinator. As a resident assistant, Zebrowski has lived out his faith by participating as a lector in Sunday and daily hall Masses and volunteering for Habitat for Humanity, the Sister Maura Brannick Health Center, Saint Joseph Regional Medical Center ER department, the Center for the Homeless and CommUniversity Day, to name a few.

The Blessed Basil Moreau, C.S.C., Leadership Award was presented to James J. White. This award is given to a graduating senior who embodies Blessed Father Moreau’s vision of educating both the heart and mind, and who has demonstrated a significant effort to advance the Catholic character of the University.

White is a resident assistant and former hall president in Duncan Hall who is majoring in the Program of Liberal Studies, classics and Latin. He spearheaded activities such as “Folgers at Four,” a Friday afternoon coffee break, and “Great Books,” an opportunity to read and discuss classics. He served as board member of the Notre Dame Encounter retreat and has participated in a summer service learning program in Jinja, Uganda.

After graduating in May and serving a summer position with Notre Dame Vision as a mentor-in-faith, White will join the pre-novitiate of the Augustinians for the Province of St. Thomas of Villanova.