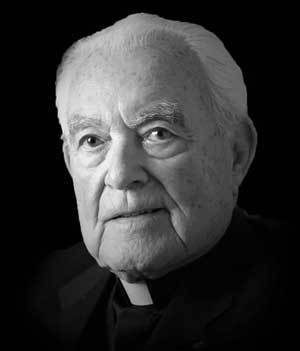 In a first for local broadcasting, “Requiem for a Legend, Rev. Theodore M. Hesburgh, C.S.C.,” a 30-minute tribute to the late University of Notre Dame president, will air simultaneously on all six South Bend-area television stations at 7:30 p.m. Friday (March 20).

Notre Dame’s leader for 35 years, Father Hesburgh was a seminal figure in higher education, the Catholic Church and national and international affairs throughout the second half of the 20th century. He died Feb. 26 at age 97.

The program provides a sometimes surprising glimpse into the life and work of Father Hesburgh from his childhood until his death. It includes rare footage and photos of him and other notable figures from the U.S. and around the world, including reference to or testimony from Presidents Dwight Eisenhower, John F. Kennedy, Lyndon Johnson, Richard Nixon, Jimmy Carter, Gerald Ford, Ronald Reagan, George H.W. Bush, Bill Clinton and Barack Obama.

In addition to the local simulcast, Lesea Broadcasting will share Father Hesburgh’s story with more than 22 million viewers worldwide on the World Harvest satellite television network. Two stations will stream the program on their websites: WNDU.com and Fox28.com.

Local broadcasters have never before simultaneously broadcast a program in honor of one person. It was produced by Big Idea Company of Mishawaka, Indiana. Viewers should refer to the local stations for broadcast information.