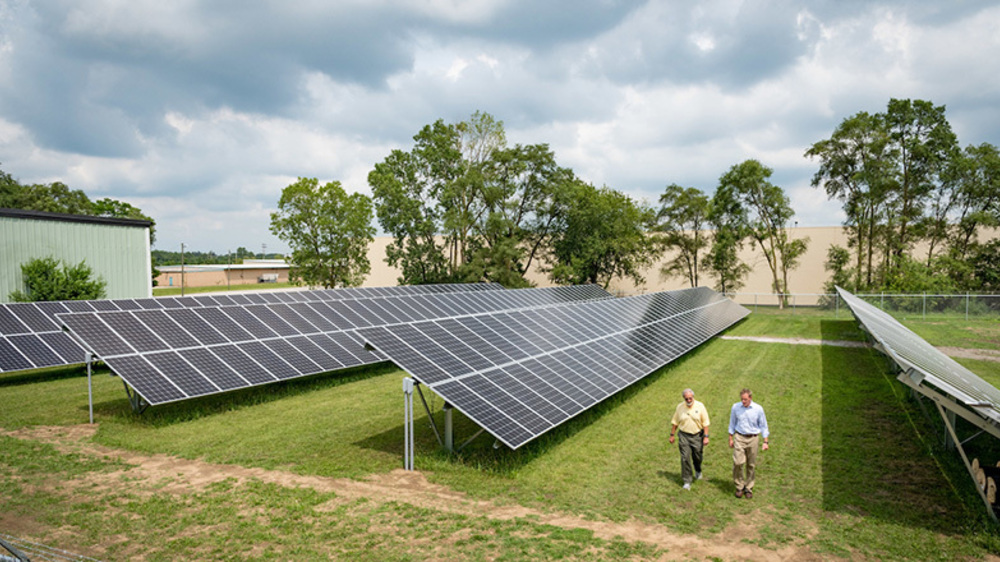 In 2015, University of Notre Dame President Rev. John I. Jenkins, C.S.C., announced a commitment to reduce its carbon footprint by more than half by 2030. A new 144.72 kilowatt ground-mounted solar photovoltaic system, located at its Kenmore Warehouse on North Kenmore Street in South Bend, is the latest addition to Notre Dame’s sustainability efforts to meet its goals.

With 432 solar modules installed on a ground-based rack, the system is a first of this size for Notre Dame. Smaller solar installations exist on campus on the roofs of Stinson-Remick Hall and Fitzpatrick Hall.

The Kenmore Warehouse solar array is connected to the main electric power feed for the building, which is used primarily for University storage. The solar array is expected to offset a portion of the purchased electric power consumption of the warehouse by generating approximately 194,000 kilowatt hours of electricity annually, representing nearly one third of the total electricity used by the 5.77-acre facility. In a net-metering agreement with Indiana Michigan Power, any power generated in excess of the building’s immediate demand will be fed into the local electric grid for use by the power company.

“The Kenmore Warehouse solar installation is another important component of the University’s sustainability commitment,” said John Affleck-Graves, Notre Dame executive vice president. “Along with solar power applications, we are implementing a number of strategies to reduce our carbon footprint to be good stewards of our environment."

The system, which was installed by Inovateus Solar of South Bend, is estimated to reduce the University’s carbon dioxide emissions by some 296,000 pounds the first year, and nearly 2,000 tons over its lifespan of some 20 years. Those avoided emissions are equivalent to removing 25 automobiles from the roads or planting more than 31 acres of trees.

The Kenmore solar project is one element in the University’s overall sustainability efforts. Additional projects include:

Notre Dame has been working to reduce its carbon footprint for more than a decade. The University has lowered emissions from its power plant by nearly 40 percent from 2005 levels, and in an effort to reduce carbon emissions from its campus combined heat and power plant, the University has reversed its use of coal from 85 percent to 15 percent in recent years. The majority of energy input to the power plant (about 85 percent) now comes from natural gas. The campus combined heat and power plant provides not just electricity, but also steam to heat campus buildings and hot water and to serve various other processes. Steam is also used in part to produce chilled water for air conditioning.

Notre Dame currently generates about 50 percent of the University’s electrical energy needs, with the other half coming through the purchase of power.