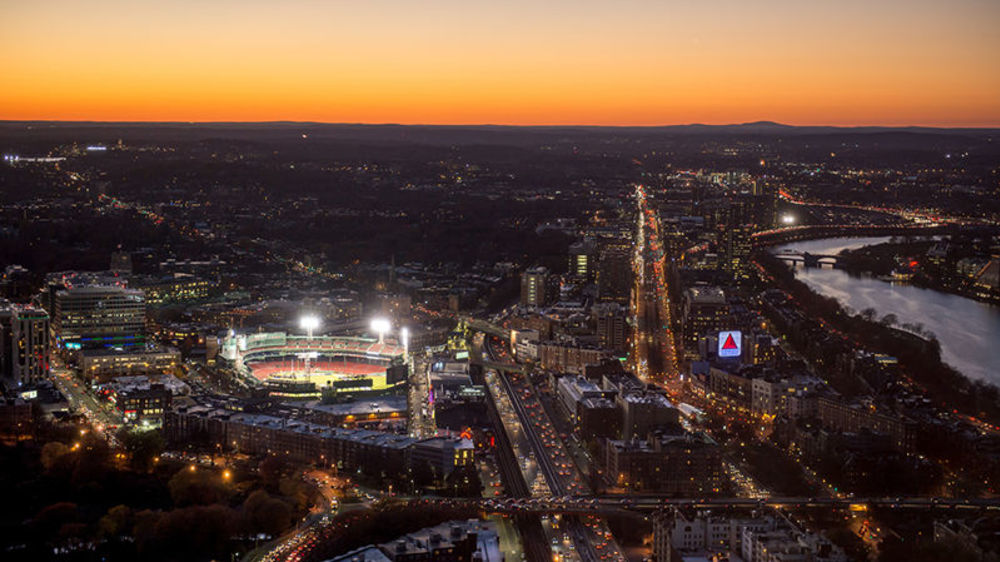 “South Bend, Mass.?” That was the headline on the front page of the Boston Globe on Friday (Nov. 20) as the University of Notre Dame descended on Boston for the annual Shamrock Series. 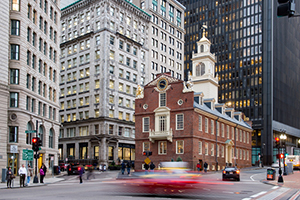 To experience a football game at the University of Notre Dame is a “bucket list” item for many. Those who attend a game on campus can attest that the intrigue is more than just what happens on the field. The combination of intellectual inspiration, spirituality, pageantry and camaraderie makes a visit to Notre Dame the unique experience that it is.

Now in its seventh consecutive year, the Shamrock Series provides the opportunity for alumni and friends around the country to experience that home game mystique in a location outside of South Bend.

This year’s Boston trip will long be considered one of the most successful Shamrock Series weekends, featuring well-attended academic events, an overwhelmingly fruitful service project, a beautiful Mass attended by hundreds, a jam-packed fan fest in the historic Fenway Park neighborhood, and a win by the football team that elevated its record to 10-1 and maintained its place in the hunt for a national playoff berth.

Over the past six years, University faculty members have traveled to Shamrock Series cities to offer insight into their research and areas of expertise. Similar to the Saturday Scholar Series conducted by the College of Arts and Letters and to the College of Science’s Saturday Science Exploration Series, the Shamrock Series academic events offer fans the opportunity to go “back to the classroom” and engage with professors and thought leaders on specific scholarly topics.

This year in Boston, a robust academic lineup featured collaborations with Boston College and the Massachusetts Institute of Technology (MIT). Law students from Notre Dame and Boston College re-enacted a portion of the closing arguments from the 1770 Boston Massacre trial at the Old South Meeting House, while architecture faculty from Notre Dame, MIT and UCLA presented a panel discussion about the inherent sustainability and public health benefits of Boston’s traditional urban design. 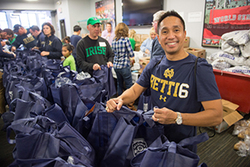 The Keough-Naughton Institute for Irish Studies held a well-attended panel presentation about the Irish in America. Featuring faculty from Irish studies programs at Notre Dame and Boston College, the discussion focused on Irish immigrants to America and their impact on immigration, religion and politics in this country. The fourth academic presentation of the weekend, organized by the Wilson Sheehan Lab for Economic Opportunities, brought together Notre Dame economists with colleagues from MIT and representatives from Catholic Charities Fort Worth and Catholic Relief Services discussing research initiatives aimed at changing the way humanitarian services are designed to improve the lives of the poor.

Another integral component to the Shamrock Series weekend is a community service project, led by the Notre Dame Alumni Association in partnership with local alumni clubs.

“The Notre Dame family is committed to serving as a force for good around the world," said Dolly Duffy, the executive director of the Notre Dame Alumni Association. "The opportunity to make a difference in the local community has always been a crucial component of these Shamrock Series weekends, and we are so proud that each year so many of our alumni and friends join together to give back.”

This year, in collaboration with the alumni club of Boston and Catholic Charities of Boston, Notre Dame alumni and friends packaged 37,000 pounds of fresh produce and dry food into more 1,500 bags that were provided to Boston families in need for the Thanksgiving holiday. 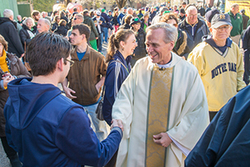 A highlight for many Notre Dame fans includes attending a Mass while on campus. During Shamrock Series weekends, the University has celebrated Mass at some of the most revered churches in the country, such as New York City’s St. Patrick’s Cathedral in 2010 and Holy Name Cathedral in Chicago in 2012. This year, University President Rev. John I. Jenkins, C.S.C., was the presider and homilist at the Mass attended by nearly 1,700 worshipers in the beautiful, historic Cathedral of the Holy Cross, the mother church of the Archdiocese of Boston.

A one-of-a-kind Notre Dame event at Boston’s famed Symphony Hall featured the Boston Pops orchestra and choir, along with an array of special guest entertainers including renowned Irish tenor Ronan Tynan, performing traditional Americana numbers along with beloved Irish favorites such as “God Bless America” and “Danny Boy.” The two-hour concert also featured a beautifully choreographed University video and musical number narrated by the evening’s emcee and Notre Dame alumna Anne Thompson of NBC News. The evening concluded with a balloon drop and surprise performance of the Notre Dame Marching Band playing the Notre Dame Victory March with the Pops.

After the final whistle blew at Fenway Park Saturday night, Notre Dame fans reflected on the historic nature of the Irish invasion, which delivered as promised on many of the traditions and spectacles that distinguish a Notre Dame game day experience in South Bend — but this time in Beantown.