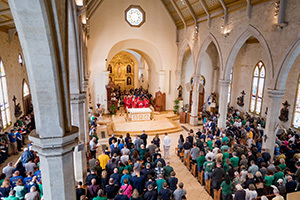 Another successful Shamrock Series is in the books. Along with a win on the field, University of Notre Dame fans young and old participated in the weekend’s activities in San Antonio, Texas, that ranged from science experiments and panel discussions on the recent presidential election to Mass, various pep performances by the Notre Dame Marching Band and a 5K race.

Friday’s academic events began at the LaVillita Assembly Building where 1,200 San Antonio-area middle-school students took part in science and engineering experiments with Notre Dame undergraduate and graduate students. Highlights of the Moment of Science included students learning about the properties of liquid nitrogen by flash-freezing grapes, flowers and balloons and making ice cream; learning about buoyancy and submarines from Navy ROTC students; watching robotic football in action; seeing sound with lasers; and more.

The local children also heard from University professors about interesting insects and the diseases they transmit, water ecology and mathematical models of facial recognition.

The first, a discussion titled “Turning Points: Election 2016 and Beyond,” was organized by Notre Dame’s Rooney Center for the Study of American Democracy and Institute for Latino Studies and began by asking perhaps the most appropriate question of its panelists: What was the biggest surprise of Donald Trump’s electoral victory?

David Campbell, chair of the Notre Dame department of political science and the Packey J. Dee Professor of American Democracy, quipped the biggest surprise was that Trump won at all, before offering the insight that the election buffeted the previous conventional wisdom that polling and microtargeting would provide the information to carry the day. The Clinton campaign used these tried and true tactics, while Campbell noted that the Trump campaign spent more money on their trademark “Make America Great Again” hats than they did on polling. Yet Trump emerged victorious.

Rep. Joaquin Castro (D-TX) opined that a shake-up in the electoral map was the biggest surprise, noting that traditionally “red” and “blue” areas changed affiliation in spots throughout the country.

Yet some surprises are only surprises in the wake of the election, according to Christina Wolbrecht, director of the Notre Dame Rooney Center for the Study of American Democracy, associate professor of political science and the C. Robert and Margaret Hanley Family Director of the Notre Dame Washington program. Wolbrecht mentioned that in light of the extreme reaction in many sectors of the country to Trump’s election victory, historians may view the result as rather normal. Incumbent parties frequently lose presidential elections, Wolbrecht noted, so a Republican winning the White House isn’t an unexpected thing, even if the candidate was a surprising standard bearer.

Not all “surprises” were as innocuous, said Luis Fraga, co-director of the Notre Dame Institute for Latino Studies. Fraga noted the dispossession felt among vast swaths of the electorate — a fairly common feature in elections — was rather easily reconciled by targeting immigrants, a group that has historically contributed to economic growth and armed service. Fraga suggested the level of this targeting was unprecedented in U.S. elections.

The panelists also offered their thoughts on the respective roles different voting blocs played in the election outcome. Along the theme of surprises, Campbell pointed out that according to exit polls, Catholics, normally a diverse group that reflects the broader electorate, sided decisively with Trump. Wolbrecht explained Trump’s success among specific groups of female voters as an expression of economic uncertainty, not necessarily as a statement on typical gender issues such as equal pay or abortion. 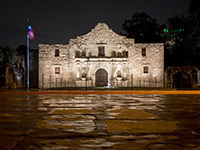 In a second discussion titled “God, Country, Notre Dame: Reflections on National Security Leadership and Conflict Prevention after 2016,” panelists offered perspectives on a Trump administration’s impact on foreign policy and national security. All panelists agreed a Trump presidency could signal a dramatic departure in the historical context in which the U.S. has operated in the world.

Michael Desch, professor of political science and director of the Notre Dame International Security Center, began the discussion by flipping a common election reaction on its head: American politics didn’t undergo a shake-up with Trump’s victory, Desch said. Instead, Trump’s victory was indicative of the shake-up in American politics that had been taking place for a while. The implications for foreign policy are deep. Desch observed the American public may be shifting toward a belief that the country should contract in its involvement on the world stage. That’s not to suggest Americans favor isolationism, but rather restraint in the alliances and conflicts to which the country commits its military.

This shift in public opinion is a result of an unprecedented uncertainty and unrest in the global community, the panelists agreed, and discussion soon turned to determining the best path forward amid ambiguity. Col. Gail Yoshitani, professor and deputy head of the department of history at the U.S. Military Academy at West Point, described how the Army is training cadets to operate effectively in this climate, with a holistic curriculum that emphasized regional history and languages that prepare military personnel to consider the broader context of a theater of operations.

Yet David Cortright, director of policy studies in the Kroc Institute for International Peace Studies within Notre Dame’s Keough School of Global Affairs, believes the U.S. has relied too heavily on a militarized solution to conflict prevention. Noting the growth of civil wars and dwindling of democratic freedoms worldwide, Cortright proposed “harnessing the full strength of America” — a strategy to include civilian leadership in building the economic and political capacities of nations. Flourishing societies are less susceptible to the influences of instability that lead to conflict.

“We should be putting out a big ‘Help Wanted’ sign,” Cortright said. “Our military needs help.”

The panel “God, Country, Notre Dame” was co-sponsored by the College of Arts and Letters and Keough School of Global Affairs.

Friday night featured performances by the Marching Band throughout the city, including a pep rally in front of the Alamo where attendees heard from former Fighting Irish and Pittsburgh Steelers great Rocky Bleier, San Antonio Spurs Hall of Famer and Notre Dame parent David Robinson and his son, student body president Corey Robinson. Notre Dame music professor of practice in voice Stephen Lancaster wowed the crowd with a pair of operatic performances. 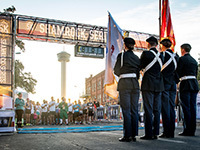 Later that evening, members of the band embarked on a floating parade down the City’s famed River Walk on multiple barges, and the drumline performed its famous “midnight” drummers circle at the Arneson River Theatre.

Led by the Leprechaun, cheerleaders and the band, nearly 900 runners and walkers took part in the Shamrock Series 5K through the streets of downtown San Antonio on Saturday, and the San Fernando Cathedral was overflowing for Mass presided by University President Rev. John I. Jenkins, C.S.C.