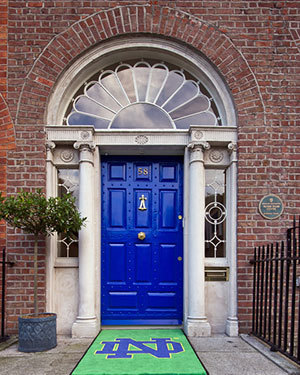 The University of Notre Dame’s Keough-Naughton Institute for Irish Studies will begin the celebration of its 20th anniversary this weekend with a campus meeting of its Ireland Council and numerous public events including a choral concert, a Mass, a lecture and an all-star exhibition hurling game.

“We have a lot to celebrate,” said institute director Christopher Fox. “From its early beginnings, the Keough-Naughton Institute’s goal has been clear and unwavering: to bring Ireland to Notre Dame and Notre Dame to Ireland. As director, I’m pleased to see the institute’s role in strengthening Notre Dame’s lasting ties to Ireland, ties that have only been made stronger by distance and years. All this has been accomplished with the combined and coordinated support of Notre Dame’s students, donors, alumni, faculty and administration, but most of all with the generous support of Donald Keough, who made it all possible in the first place. We are pleased to acknowledge and celebrate his many contributions to the life of the University during our Ireland Council weekend.”

A concert performance of song from medieval Ireland will be given by CANTORAL, an all-female vocal ensemble from the University of Limerick, at 8 p.m. Thursday (Oct. 17) in the Reyes Concert Hall of the DeBartolo Performing Arts Center. 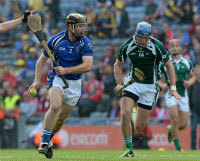 A lecture on “Hurling: the Greatest Game on Earth” will be given by Kevin Whelan, Smurfit Director of the Keough-Naughton Notre Dame Centre in Dublin, at 4:30 p.m. Friday (Oct. 18) in the Hesburgh International Center auditorium. Whelan’s lecture will feature demonstrations by members of the All Star (Ireland) Hurling team.

The all-star Irish hurlers will compete in an exhibition game, the Celtic Champions Classic, at 3 p.m. Saturday (Oct. 19) in Arlotta Stadium. No tickets will be required for admission and seating will be available on a first-come, first-served basis.

Notre Dame President Rev. John I. Jenkins, C.S.C., will preside at a Mass marking the institute’s anniversary at 8:45 a.m. Saturday (Oct. 19) in the Lady Chapel of the Basilica of the Sacred Heart. Sacred music will be sung both in Irish and English by the Notre Dame Folk Choir.

Among institute activities under discussion at the Ireland Council meeting will be the development and production of a three-hour, three-part documentary television series titled “1916: The Irish Rebellion.” The series will examine the 1916 Easter Rising in Dublin as a watershed event, not only in Irish history, but in world history, that both foreshadowed and brought about the collapse of the world’s colonial powers. Timed for release in advance of the Rebellion’s centenary, the documentary will be distributed in the United States, Ireland, Canada and Australia through national and international public television channels, and made available to the school market through DVDs and accompanying study materials.

The anniversary also will be celebrated in Ireland, where the Keough-Naughton Institute will sponsor two conferences. The first of these, “Sovereignty, Debt and Equity in a Time of Crisis,” will be held Oct. 22-24 in Dublin at the Notre Dame Centre’s O’Connell House and the Royal Irish Academy. The conference will bring together leading scholars in economics, history, sociology, literature and law, as well as members of the Irish media, to discuss the nation’s debt crisis as the Irish Republic approaches the centenary of the 1916 Easter Rebellion.

A second conference, “Roger Casement (1864-1916): The Glocal Imperative,” will be held Oct. 24-26 in Tralee. Chaired by Brian Ó Conchubhair, associate professor of Irish language and literature at Notre Dame, the conference will gather international scholars the life and times of Casement, the Irish nationalist, revolutionary and poet, and his engagement in Irish and transnational affairs and issues.