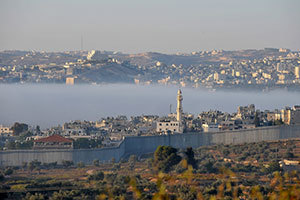 View into Bethlehem from the Tantur Ecumenical Institute

Rev. Russell McDougall, C.S.C., has been appointed rector of the Tantur Ecumenical Institute, a Jerusalem-based center of theological scholarship and learning administered by the University of Notre Dame. The appointment becomes effective July 1.

“Father McDougall’s exemplary scholarship, long pastoral service and ardent commitment to ecumenism should well equip him for this crucial position,” said Notre Dame’s president, Rev. John I. Jenkins, C.S.C. “We know that under his direction, Tantur will continue to thrive in the Holy Land as a unique and invaluable center for study, prayer and pilgrimage.”

Father McDougall, who now resides at Stonehill College in Easton, Massachusetts, served in East Africa for nearly 15 years as associate pastor of Holy Cross Parish in Nairobi, Kenya; director of candidate formation for the Congregation of Holy Cross in Jinja, Uganda; and academic dean and lecturer in Old Testament at Queen of Apostles Philosophy Center in Jinja. Most recently, Father McDougall has been engaged in doctoral studies at the Pontifical Biblical Institute in Rome. He also has studied at Hebrew University of Jerusalem. His academic work has focused on Biblical narratives as works of art and moral agency. A frequent guest preacher in Methodist and Anglican congregations in Rome and Bologna, Father McDougall also has been an associate and friend of the Anglican Centre in Rome and of Temple Chayai Shalom in Easton.

Founded by Pope Paul VI, Tantur is a center for theological scholarship and a gathering place for scholars and students of all faiths. Located on a hilltop between Jerusalem and Bethlehem, the institute is housed in a facility with more than 50 guest rooms, 10 apartments, a large auditorium and one of the finest theological libraries in the Holy Land. In addition to its academic programs, the institute sponsors continuing education for clergy, religious teachers and other church workers.