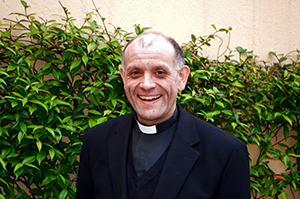 Rev. Friedrich Bechina, F.S.O., undersecretary of the Vatican’s Congregation for Catholic Education, will give the 2016 Keeley Vatican Lecture, titled “The Holy See’s Higher Education Policy from St. John Paul II to Pope Francis,” at 5 p.m. April 6 (Wednesday) in Visitation Hall of Remick Commons at the University of Notre Dame.

Rev. John I. Jenkins, C.S.C., president of the University, will introduce Father Bechina.

A native of Vienna, Father Bechina served as in officer in the Austrian army and studied economics, philosophy and theology in Vienna and later at the Gregorian Pontifical University in Rome, from which he earned a doctoral degree in 1997 for his prize-winning doctoral thesis, “The Church as the Family of God.”

After years serving in parishes in Austrian Diocese of Feldkirch, Father Bechina was appointed to the Congregation for Catholic Education, and in 2013 became its undersecretary. Jointly responsible for more than 2,500 Catholic institutions of higher education, Father Bechina has since 2005 managed the congregation’s international activities in the area of higher education and represented the Holy See in relevant organizations and international initiatives.

Father Bechina also will preside at Mass at 11:30 a.m. April 6 in the Basilica of the Sacred Heart.