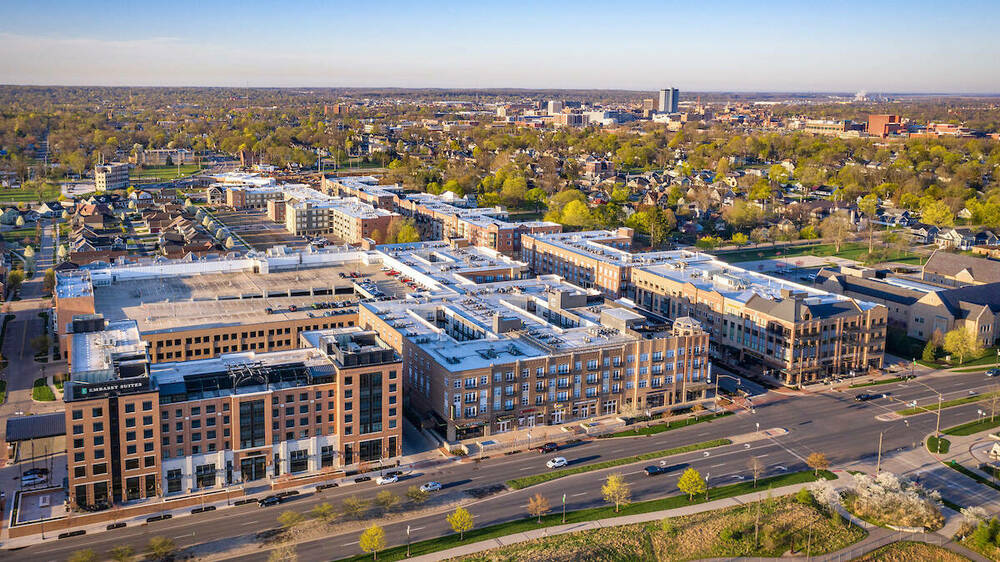 The area south of the University of Notre Dame, including Eddy Street Commons and the surrounding Northeast Neighborhood, added more than 600 residents between 2010 and 2020, accounting for a quarter of all growth in South Bend during that time, according to newly released census data.

The growth south of campus corresponds with hundreds of millions of dollars of new investment there, from new homes and apartments to new retail, office, hotel and restaurant space, as part of a plan to revitalize the approximate 10-by-10-block area and reverse decades of disinvestment and decline.

The University also invested in new public-facing buildings and grounds on the border between campus and the Northeast Neighborhood, including the DeBartolo Performing Arts Center and Irish Green, the new Walsh Family Hall of Architecture, the Charles B. Hayes Family Sculpture Park, Compton Family Ice Arena and the upcoming Raclin Murphy Museum of Art.

According to the census data, these and other investments, including increasing spot development of vacant or underdeveloped lots in the area, contributed to 927 new housing units and 636 new residents between 2010 and 2020, with even more housing under construction or in the planning stages.

That includes a significant number of affordable homes — available to those who earn less than 80 percent of the area median income — in line with the NNRO’s commitment to preserving and enhancing diversity in the neighborhood.

The result is a dense, vibrant, walkable neighborhood of detached single-family homes, townhomes and apartments, as well as shops, restaurants, offices, parks and green spaces, contributing to improved quality of life for residents and increased property, sales and income tax revenues for local governments.

“The population growth in the Northeast Neighborhood is a win-win for the University and the broader community,” said Tim Sexton, associate vice president for public affairs at Notre Dame. “For two decades, we have worked collaboratively with the city of South Bend, business partners and residents to bring a variety of housing options, retail and commercial development to the area. It is incredible to see the efforts of many paying off.”

James Mueller, mayor of South Bend, said, “We’re thrilled that the 2020 census confirmed that South Bend is a growing city once again. The University of Notre Dame played a critical role in our turnaround story and will continue to be an important community partner as we take our growth to the next level.”

The Northeast Neighborhood was not the only area around campus to gain population.

According to the data, the East Bank area, including parts of the Northeast Neighborhood around Niles Avenue and Howard Street, grew by 3.6 percent, or 47 residents, while the area east of campus, from Twyckenham Drive east to Hickory Road, grew by 10.9 percent, or 282 residents.