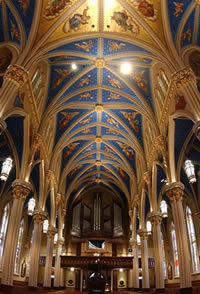 Bishop John M. D’Arcy of Fort Wayne/South Bend will preside at the Red Mass for students, faculty and administrators of the Notre Dame Law School at 10 a.m. Oct. 11 (Sunday) in the Basilica of the Sacred Heart.

Sacred music for the Mass will be provided by the Notre Dame Liturgical Choir.

A tradition which arose in 13th century Europe, the Red Mass formally opened each term of the legal year in England, France and Italy, with judges, lawyers and other officials calling upon the Holy Spirit to enlighten their adjudications during the coming term of court.

The Mass takes its name from the red vestments liturgically required for a votive Mass of the Holy Spirit and worn by the presiding celebrant and many of the attending officials. In the United States, it is often celebrated on the first Monday of October to coincide with the opening of the Supreme Court’s term.