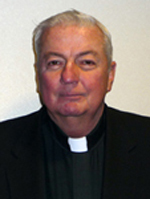 Rev. Richard V. Warner, C.S.C., director of Campus Ministry at the University of Notre Dame, has been elected the 12th superior general of the Congregation of Holy Cross. He will succeed Rev. Hugh W. Cleary, C.S.C., effective at the conclusion of the congregation’s General Chapter meeting this week in Rome.

“Father Warner has served Notre Dame with distinction in many and varied capacities, and we are collectively – and I am personally – indebted to him for his wise counsel, witness to the Gospel and service to our campus and broader community,” said Rev. John I. Jenkins, C.S.C., the University’s president. “The General Chapter has made an astute decision in electing Father Warner to lead our congregation and, while we will miss him and his ministry at Notre Dame, we rejoice that his talents will be shared in new ways around the world.”

Father Warner will lead the worldwide ministries of Holy Cross from its headquarters in Rome. Founded in 1837 by Rev. Basil Moreau, C.S.C., the congregation is a religious order of some 1,500 priests and brothers in the Catholic Church who live and work in 16 countries on five continents. Blessed Basil Moreau was beatified in 2007.

Among the congregation’s early members was Rev. Edward F. Sorin, C.S.C., who founded Notre Dame in 1842. The congregation has founded seven other colleges and universities in the United States and 45 secondary schools worldwide, including 19 in the U.S. In addition to education, Holy Cross is actively committed to parish work and missionary outreach.

Father Warner is a past provincial superior of the congregation’s Indiana Province, which is based in South Bend, Ind., and, among the priests, the largest of the provinces.

Father Warner was graduated from Notre Dame in 1962, studied theology at Catholic University in Santiago, Chile, obtained his licentiate degree from there in 1966, and was ordained the same year in Lakewood, Ohio.

From 1967 to 1973, Father Warner taught English and theology at St. George’s College in Santiago, where he also served in the administration. In 1973, he became the provincial treasurer and a member of the Provincial Council for the Indiana Province. He became provincial superior in 1979.

Father Warner served as counselor to Notre Dame President Rev. Edward A. Malloy, C.S.C., and in 1989 was appointed director of Campus Ministry, which promotes, encourages and engages all aspects of faith life on campus.

A Trustee Emeritus of Notre Dame, Father Warner serves as chair of the board of directors of the Center for the Homeless and Memorial Health Systems, both of South Bend. He is a corporate member of Holy Cross Family Ministries of New York.

Notre Dame awarded him an honorary degree in 1987.