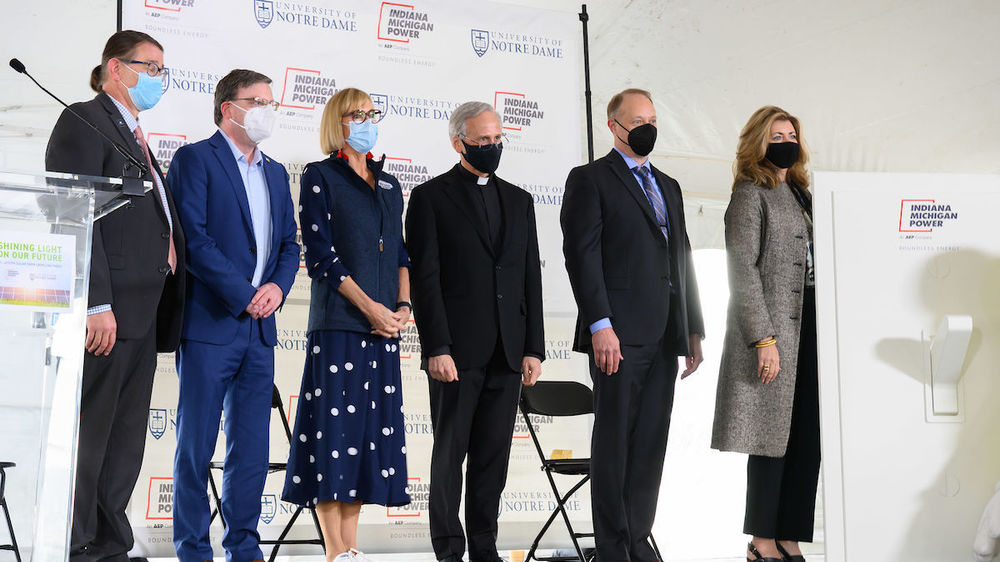 Indiana Michigan Power and the University of Notre Dame held a ribbon cutting Thursday (May 6) for St. Joseph Solar Farm, a new 210-acre solar facility adjacent to the Indiana Toll Road in Granger, about seven miles east of Notre Dame.

A division of American Electric Power, I&M broke ground on the facility in July of last year. Construction concluded in January, followed by start-up and performance testing in February. It opened in late March.

Consisting of nearly 60,000 photovoltaic solar panels, the facility is I&M’s largest solar installation, able to generate 20 megawatts of clean, renewable energy annually, or enough to power an average of 2,700 homes.

As a partner in the project, Notre Dame has agreed to purchase 40 percent of that energy — equal to about 10 percent of the University’s annual need for electricity — in the form of clean energy credits, which it will use to offset carbon emissions and improve air quality in South Bend and the surrounding community.

It has also agreed to work with I&M to capitalize on the educational and research benefits of the facility, which sits at the northeast corner of Bittersweet and Cleveland roads on converted farmland that once belonged to Notre Dame.

The agreement is for 30 years.

“Few challenges in our world, in our nation, in our community are as vast and complex as the challenge of climate change and changing the patterns of energy emissions to address that problem,” said Notre Dame President Rev. John I. Jenkins, C.S.C. “So it is great to see us here today working toward that.”

“I really want to thank Father Jenkins and the Notre Dame Team for partnering with us,” Toby Thomas, president and chief operating officer for I&M, said. “It’s been a very collaborative effort. I want to thank them for their commitment to environmental stewardship and for being a great partner and being easy to work with.”

For their parts, Mueller and Kostielney presented proclamations to Notre Dame and I&M declaring Thursday (May 6) to be “Solar Energy Day” in the city and county, respectively.

The event concluded with the flip of a giant light switch to “activate” the new facility.

Covering the equivalent of 30 football fields, the facility adds to I&M’s growing portfolio of solar projects, which number five now in Indiana and Michigan. The company also operates six hydro facilities and purchases wind power from three sources. The company generated 85 percent of its energy from clean sources in 2020.

For Notre Dame, it is the latest in a series of investments aimed at slashing campus carbon emissions by 83 percent from 2005 levels over the next 30 years.

In the past three years alone, the University has activated a new geothermal heating and cooling plant, partnered with outside organizations to convert food waste to energy, installed the state’s largest green roof atop the Joyce Center and ceased burning coal. It will soon activate a new hydro facility on the St. Joseph River in downtown South Bend. The facility will generate about 7 percent of the University’s electrical needs and offset nearly 9,700 tons of carbon dioxide annually.

For more information on these and other projects, visit green.nd.edu.