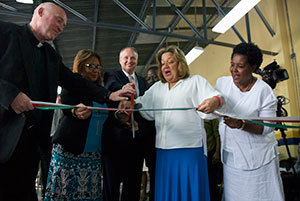 In partnership with the Haitian Ministry of Public Health and the Population (MSPP), the Congregation of Holy Cross and other partners, the University of Notre Dame Haiti Program dedicated a new fortified salt production plant Monday (Dec. 8) in Delmas, Haiti. Several administrators were in attendance, including Sophia Martelly, first lady of Haiti.

The new facility, which will supplement an existing facility at Cite Militaire, will be used to expand the production of clean, iodized salt for the Haitian population by providing the nation’s first brine-wash facility. This equipment, which should be fully operational in early 2015, will allow local Haitian salt to be cleaned to food-grade quality prior to being fortified and packaged for consumption by the Haitian people.

Since 2005, and in coordination with MSPP, the Notre Dame salt project has sought to eliminate iodine deficiency disorders in Haiti and stop the transmission of Lymphatic filariasis through ongoing mass drug administration efforts. Iodine deficiency causes several health problems, including goiter and intellectual impairment in children. Filariasis, also known as elephantiasis, is a parasitic disease that causes enormous swelling of the limbs and genitals.