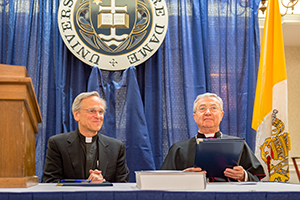 The University of Notre Dame and the Biblioteca Apostolica Vaticana, or Vatican Library, formalized a unique agreement of collaboration and exchange in a ceremony Monday (May 9) in the Hesburgh Room of the Morris Inn, where Notre Dame president Rev. John I. Jenkins, C.S.C., and Archbishop Jean-Louis Bruguès, O.P., archivist and librarian of the Holy Roman Church, together signed a memorandum of understanding.

The only such collaboration between the Vatican Library and any American academic institution, the agreement will develop visits and informal exchanges of faculty, scholars, librarians and administrators; organize joint conferences, lecture series, art exhibitions, and musical and theatrical performances; and explore the development of joint programs of research.

In remarks preceding the signing, Father Jenkins spoke of his delight in beginning to work with his longstanding friend, Archbishop Bruguès, who had been the secretary of the Congregation for Catholic Education when the two first met.

“If you ask a writer which of his works best represent him he always responds by referring to his latest publication,” Archbishop Bruguès joked, presenting Father Jenkins with the latest publication of the Vatican Library, a collection of drawings by the baroque artist Gian Lorenzo Bernini, and promising (“It’s coming very soon!”) an engraving of the Basilica of Saint Peter’s that the library had presented to Pope Francis earlier this year.

Father Jenkins gave Archbishop Bruguès an engraving of Notre Dame’s Main Building above a replica of the letter by which Notre Dame’s founder, Rev. Edward Sorin, C.S.C., established the Notre Dame Archives. Father Jenkins justified the considerable difference in size and scope between the two collections as due to the Vatican’s having “a much earlier start.” He then obliged Archbishop Bruguès’ request to indicate on the engraving the windows of Father Jenkins’ Main Building office.

Asked what had attracted the Vatican Library to the new collaboration, Archbishop Bruguès replied in French, through a translator, that he hoped the arrangement would enhance the presence of the Biblioteca Apostolica Vaticana in the United States and the world and reach a larger public. When he was appointed Vatican librarian, he said, he was “surprised and even a bit disillusioned” to learn that “so many treasures that are within its collection and that really belong to the whole of humanity are not available to the whole of humanity.” He said he hopes to increase the number of scholars with access to the library and that “Notre Dame is the best place to start that process here in America.”

The Vatican Library’s holdings today include some 80,000 manuscripts; 100,000 archival documents; 1.6 million printed books, including nearly 9,000 incunabula, 150,000 prints, thousands of drawings and plates; over 200,000 photographs; and 300,000 coins and medals, among other items. The manuscript collection includes such invaluable materials as the “Codex Vaticanus” of the Bible; the “Vergilius Vaticanus,” containing fragments of Virgil’s Aeneid; the “Dante Urbinate”; and other manuscripts that are used to produce modern editions of countless ancient texts.

“The collaboration will obviously provide a wonderful resource for our scholars and our students,” Father Jenkins said, “but at a deeper level it joins our mission to foster learning and faith with a place that is such an icon of the Church’s commitment to see the harmony between the two.”