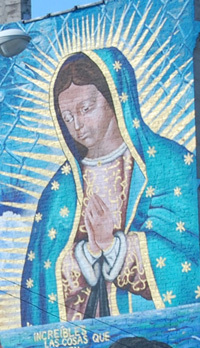 On Dec. 12, a national task force commissioned by the University of Notre Dame will release a report and launch a campaign to improve educational opportunities for the next generation of American Latinos by expanding their access to Catholic schools. Through the efforts of “The Catholic School Advantage: The Campaign to Improve Educational Opportunities for Latino Children,” the task force will seek to enroll 1 million Hispanic students in Catholic schools by 2020. The report, titled “To Nurture the Soul of a Nation: Latino Families, Catholic Schools, and Educational Opportunity,” will be distributed to a national audience of 10,000 stakeholders on the Feast of Our Lady of Guadalupe, exactly one year after the task force was established by Rev. John I. Jenkins, C.S.C., Notre Dame’s president. The committee was co-chaired by Juliet V. Garcia, president of the University of Texas at Brownsville, and Rev. Joseph Corpora, C.S.C., director of university-school partnerships for Notre Dame’s Alliance for Catholic Education (ACE), and included more than 50 national leaders from the Latino community, the Catholic Church, academia, government, business, philanthropy and K-12 education. Nationwide, U.S. classrooms have seen rapid growth in the number of Latino students, but research shows American schools are not serving these children well, and Latinos lag well behind their peers on most measures of educational achievement. The task force report highlights research suggesting that Latino students who attend Catholic schools enjoy a “Catholic school advantage” that helps to close the achievement gap, but the report notes that only 3 percent of Latino families send their children to Catholic schools. “Much is at stake,” Garcia said, “no less than the future generation of leaders for our country. Catholic schools must remain a steady and strong conduit for the many new generations of Latinos at their doorstep.” To improve educational outcomes for more Latino children, the task force will seek to double that percentage to 6 percent by 2020, which, given population growth estimates, will entail increasing the number of Latino children in Catholic schools from 290,000 to more than 1 million. Members of the task force spent the past year conducting research and developing recommendations for schools, dioceses, Church leaders, the philanthropic community, civic organizations, policymakers and institutions of higher education, ultimately publishing a report that provides a road map for reaching the task force’s enrollment goal. While the task force noted that financial obstacles often are perceived to be the greatest barrier to enrolling more Latinos in Catholic schools, in reality there are information, cultural and leadership gaps that can be addressed in low-cost ways to increase demand and expand access to Catholic schools for this community. To support the ongoing work of the task force, ACE, in collaboration with Notre Dame’s Institute for Latino Studies, will lead “The Catholic School Advantage” campaign. Through this campaign, ACE and Notre Dame expect to forge partnerships with dioceses to implement task force recommendations in efforts to boost enrollment in Catholic schools located near growing Latino communities. The Archdiocese of Chicago has agreed to join the campaign, and discussions are underway with five other (arch)dioceses that serve large Latino populations. The campaign will be led by Father Corpora, a former pastor with nearly 20 years of experience in parishes and schools effectively serving Latinos. For some members of the task force, the connection to Latino Catholic schooling was deeply personal. “Starting my education in a Catholic school changed the trajectory of my life. I want all Hispanic children to have that chance,” said task force member Sara Martinez Tucker, former under secretary of education in the U.S. Department of Education and a Notre Dame Trustee. Other members of the task force echo Tucker’s commitment to the common good. “We face an urgent moral imperative to serve our nation and our faith by making the Catholic school advantage accessible to millions of talented, under-served Latino children,” said Rev. Timothy R. Scully, C.S.C., founder of ACE and director of the Institute for Educational Initiatives at Notre Dame. “In doing so, the Catholic community will serve our nation and our faith. These schools will nurture souls but also, as Pope Benedict suggests, they will nurture the soul of our nation.” For more information about the task force, to download an electronic copy of the report or order a hard copy, or to join the Catholic School Advantage campaign, visit "http://catholicschooladvantage.nd.edu":http://catholicschooladvantage.nd.edu. _*Contact*: Rev. Joe Corpora, C.S.C., "Corpora.2@nd.edu":mailto:Corpora.2@nd.edu, 574-631-1601_