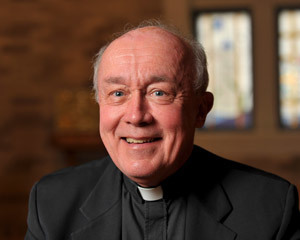 Father Daley is the 26th theologian to receive the Quasten Medal since the award was established in 1985. The Quasten Medal memorializes a professor of religious studies and German native who taught and studied at Catholic University from 1938 to 1979.

In announcing Father Daley’s honor, Rev. Mark Morozowich, dean of theology and religious studies at Catholic University, said that “his erudite scholarship witnesses to the importance of patristic study and its influence in theology today, and his many contributions shine as a bright example.”

“I was deeply honored and delighted to receive this award from the Catholic University School of Theology,” Father Daley said. “Johannes Quasten was one of the pioneers in the study of the Church Fathers in North America. His encyclopedic handbook of patrology helped me, in my freshman year as an undergraduate at Fordham, to become fascinated for the first time by these voices from the early Christian centuries, who still focus our minds on the mystery of Christ. I’m also thrilled to be listed among previous recipients of the award, including some of the great names associated with our program here at Notre Dame, like Louis Bouyer, Robert Markus and my colleague Father Virgil Elizondo. This really is a recognition for Notre Dame’s whole theology department and for the kind of work we do!”

A member of the Notre Dame faculty since 1996, Father Daley, a Jesuit priest, is an internationally renowned scholar of the writings, sayings and lives of the earliest Christians. His teaching and research concerns such first- through eighth-century Christian thinkers as Gregory of Nyssa, Augustine of Hippo and Maximus the Confessor, and the eschatology of the early church.

A 1961 graduate of Fordham University and a Rhodes Scholar, Father Daley studied classics, philosophy and ancient history at Merton College, University of Oxford, where he earned a master’s degree before entering the Society of Jesus in 1964 and being ordained a priest in 1970. He returned to Oxford in 1972, earned a doctoral degree in theology in 1978 and taught at the at the Weston Jesuit School of Theology in Cambridge, Mass., for 18 years before coming to Notre Dame.

Among the numerous books Father Daley has written or edited are “The Hope of the Early Church,” “On the Dormition of Mary: Early Patristic Homilies” and “Gregory of Nazianzus.” He also has translated Hans Urs von Balthasar’s “The Cosmic Liturgy: The Universe According to Maximus the Confessor.” In addition to his academic and scholarly work, he serves as executive secretary of the Catholic-Orthodox Consultation for North America and as a priest in Notre Dame residence halls and at St. Bavo Parish in Mishawaka, Ind.

Last October, Father Daley received the 2012 Ratzinger Prize in Theology from Pope Benedict XVI at a ceremony in Rome.