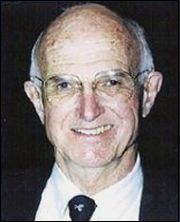 Dr. Joseph E. Murray, the Nobel laureate who performed the first successful organ transplant 51 years ago, has been awarded the University of Notre Dame’s Laetare Medal for 2005. He will receive the medal, the oldest and most prestigious honor given to American Catholics, during the University’s 160th Commencement exercises May 15 (Sunday).

“Human lives and hopes have been wonderfully invigorated by Joseph Murray’s 1954 medical triumph,” said Notre Dame’s president, Rev. Edward A. Malloy, C.S.C. “The genius, erudition and skill he brought to bear in the surgical arena are all gifts from God which this good doctor has made gifts to humankind. By honoring this splendid generosity, we mean to thank his Benefactor, Who is ours as well.”

Born April 1, 1919, in Milford, Mass., Murray received his medical degree from Harvard Medical School in 1943 after being graduated from the College of the Holy Cross in Worcester. In 1944, he began his surgical training at Brigham and Women’s Hospital in Boston, and from 1944 to 1947 served as a surgeon at the U.S. Army’s Valley Forge General Hospital in Philadelphia. He became interested in the biology of tissue and organ transplantation at Valley Forge, where there was a major plastic surgical center to treat WWII battle casualties.

On Dec. 23, 1954, at Brigham and Women’s Hospital, then called Peter Bent Brigham Hospital, Murray successfully transplanted a donated kidney from one brother to his genetically identical twin brother. The recipient survived for several years. Murray continued to search for ways to suppress a patient’s immune system to keep it from rejecting genetically foreign parts. In 1962, administering immunosuppressive drugs, he performed the first successful kidney transplant using a kidney from a donor unrelated to his patient. Eventually he also was able to successfully transplant a kidney from a cadaver.

In 1990, Murray (with E. Donnall Thomas) received the Nobel Prize for Physiology or Medicine for his work in lifesaving organ and tissue-transplant techniques, becoming one of only four surgeons to have received the honor.

Murray, who retired from surgery in 1987, remains active as a lecturer, writer and consultant. He was appointed to theVatican’s Pontifical Academy of the Sciences in 1996.The author of a 2001 autobiography, “Surgery of the Soul,” he also is a fellow of the American College of Surgeons and an honorary fellow of the Royal Colleges of Surgery of England, Ireland, Edinburgh, Belgium, Canada, Australia and Singapore.

The Laetare (pronounced Lay-tah-ray) Medal is so named because its recipient is announced each year in celebration of Laetare Sunday, the fourth Sunday in Lent on the Church calendar. “Laetare,” the Latin word for “rejoice,” is the first word in the entrance antiphon of the Mass that Sunday, which ritually anticipates the celebration of Easter. The medal bears the Latin inscription, “Magna est veritas et prevalebit”—“Truth is mighty, and it shall prevail.”