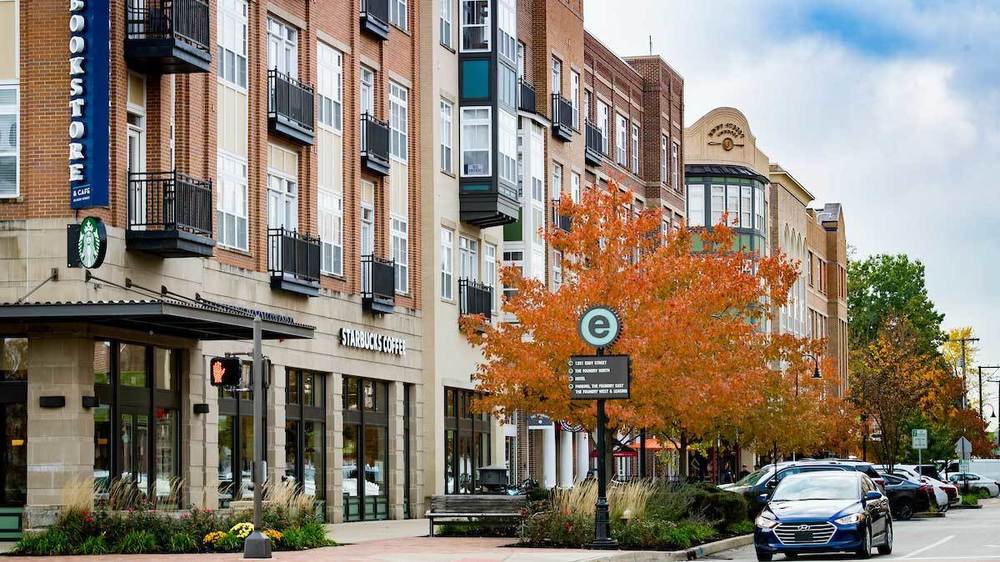 Work is underway on Phase II of Eddy Street Commons, the $90 million mixed-use project south of the University of Notre Dame.

Work on Phase I of the project, featuring 170,000 square feet of retail/restaurant/office space, 266 apartment units, 123 condo units, 78 row/townhomes, a 1,276-vehicle multi-level parking garage, a 119-room Fairfield Inn & Suites and a 164-room Embassy Suites, is nearly complete, with the Embassy Suites set to open in September 2018.

The mixed-use space — retail, office and apartments — is 100 percent leased, and the condos and townhomes have all been sold.

Combined, the two phases represent a nearly $300 million investment in the Northeast Neighborhood, a diverse single-family neighborhood directly south of the University characterized by walkable, tree-lined streets and a mix of old and new homes.

Phase I focused on the first block of Eddy Street directly south of campus, from Angela Boulevard to Napoleon Boulevard. Phase II focuses on the three blocks of Eddy from Napoleon to Indiana 23.

Moving north to south, the apartment buildings will step down from four to three stories closer to Howard to blend with the existing single-family homes there. Parking for the market-rate apartments will be underground on the west side of the street, with capacity for 145 vehicles.

A stand-alone grocery store is proposed for the southwest corner of Howard and Indiana 23, where the Robinson Center now sits. The Robinson Center, an off-campus educational initiative of the University, will move to a new one-story, 13,000-square-foot building across the street.

In response to requests from residents and business owners for more local business offerings in Phase II, the buildings closest to Napoleon will feature 17 “flex” units — modest street-level units that can be adapted for commercial or residential use depending on demand.

Examples of the types of businesses that could occupy such spaces include small, local specialty shops, small cafes or coffee shops or insurance or law offices.

The building at the southwest corner of Eddy and Napoleon, diagonal from Brothers Bar & Grill, will feature 8,500 square feet of ground-floor restaurant space.

“Phase II will complement the look and feel of Phase I and the surrounding neighborhood through its architecture, site design and scale,” said Matt Gabet, senior vice president of operational strategy with Indianapolis-based Kite Realty.

He praised Notre Dame as a “true partner” in the project.

“Because of our partnership structure and collective determination, we were able to work through issues, solve problems and deliver the project you see today,” Gabet said.

He also praised the city of South Bend, which assisted with zoning, planning and financing for Phase I and now Phase II.

“Without our third partner, the city of South Bend, both phases would never have gotten off the ground,” he said. “Unlike a lot of cities, South Bend has been forward-thinking in its approach and use of public/private partnerships to drive investment and growth.”

Hakanen praised Kite for its commitment to Phase I “through the depths of the 2008-2012 financial crisis and housing crash, which crippled the broader real estate industry.

“It was this extraordinary commitment to the project that made engaging Kite as the developer for Phase II an easy decision,” Hakanen said.

“Eddy Street Commons Phase II will build upon Phase I’s success in growing the South Bend economy and strengthening the city’s relationship with Notre Dame,” South Bend Mayor Pete Buttigieg said. “Because the project pays for itself, it is a win-win for Notre Dame, local employers and the South Bend community.”

The University sponsors the Notre Dame Avenue Housing Program, a single-family owner-occupied housing program for full-time faculty and staff. And the NNRO has partnered with the city of South Bend and South Bend Heritage Foundation to redevelop The Triangle, a mixed-income housing development between Indiana 23 and Eddy Street Commons featuring 52 single-family homes.

Phase II is the final phase of Eddy Street Commons. Completion is set for mid-2020, with the graduate apartments set to open first in mid-2019.

“Phase I of Eddy Street Commons far surpassed the expectations residents had. The project brought great excitement and a much-needed commercial district within walking distance for many of us,” said Bill Stenz, president of the Northeast Neighborhood Council, one of two neighborhood groups in the area. “Phase II will continue this progress.”