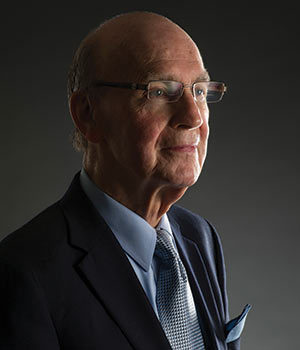 James V. Gibbons, the assistant vice president for special events and protocol for 37 years at the University of Notre Dame, died Monday (Oct. 2). He was 87.

“Jim was always a hard worker who was meticulously prepared,” said Rev. Edward A. Malloy, C.S.C., Notre Dame’s president from 1987 to 2005. “He was also a master of names and faces. This made him an outstanding ambassador of the University. It was my pleasure to work closely with Jim during my years as president. He was always energetic, supportive, candid and open to change. By the time he retired, he had built one of the most outstanding hospitality operations in American higher education.

“Jim was a person of faith, a dedicated Notre Dame representative and someone with a great network of friends. He oversaw more public events than anyone in his generation. His spirit of generosity and service will be long remembered. May he rest in peace.”

A 1953 graduate of Notre Dame, Gibbons worked at his alma mater for 43 years, six in athletics as an assistant baseball and basketball coach, and then for 37 in University Relations, primarily leading the special events department. He organized the campus visits of four U.S. presidents and numerous international heads of state, the dedication of 38 buildings on the campus, and hundreds of dinners, receptions and convocations.

Gibbons was a standout baseball, basketball and football player at Mt. Carmel High School on Chicago’s south side. He was widely recruited in all sports, but his football and basketball coaches were Notre Dame graduates, and, Gibbons said, “They weren’t about to let me go anywhere but Notre Dame. It was fate.”

He attended Notre Dame initially on a football scholarship but eventually ended up starring in baseball and basketball. He was drafted by the Philadelphia Phillies as a pitcher and played for one season in their system before being drafted into the U.S. Army. He spent the next two years in New Orleans as a military policeman and then returned to Mt. Carmel to teach civics and speech and to coach baseball and basketball.

“For that, I will be forever grateful,” Father Malloy said.

After six years, Gibbons left coaching and joined the University Relations division, first in the public relations office and then as the University’s chief protocol officer. In addition to his full-time job, Gibbons also refereed college basketball games for many years and for more than two decades served as a radio and television color analyst on Atlantic Coast Conference, Missouri Valley Conference and Notre Dame basketball games.

Gibbons spent most of his retirement years serving as a volunteer at St. Joseph Regional Medical Center, where he would call on recently discharged patients and make hospital room visits.

Gibbons was awarded a Presidential Citation in 1979 for outstanding contributions to the University and in 1988 received the Notre Dame Alumni Association’s James E. Armstrong Award, which honors a University graduate and employee for distinguished service. In addition, he received the Edward “Moose” Krause Award from the Notre Dame Club of Chicago and the inaugural Jesse Harper Award from the Notre Dame Monogram Club. William and Janie Kelly of Southern Pines, North Carolina, established the James V. Gibbons Scholarship for Notre Dame students who demonstrate loyalty, spirit and intellectual and athletic achievement.

Father Malloy will preside at a funeral Mass at 9:30 a.m. Oct. 9 (Monday) at Notre Dame’s Basilica of the Sacred Heart.