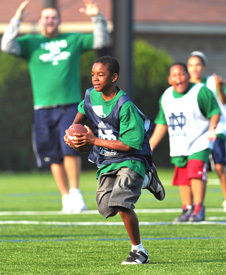 Global Football and the Play Like A Champion Today Educational Series (PLC) have partnered to create a character award to recognize athletes participating in the Global Ireland Football Tournament (GIFT) 2012 in Ireland this summer.

PLC is an affiliate of the Institute for Educational Initiatives at the University of Notre Dame and is a program for teaching, outreach and research. Its mission is to develop the whole person through sports in a moral community by producing and delivering character-oriented, research-based educational programs for coaches, parents, athletes and administrators.

Each of the 10 high schools and two universities whose football teams will travel from the United States to play their 2012 season-opening game in Ireland on Aug. 31 (Friday) will be asked to nominate one athlete for the award before heading overseas.

The PLC Character Award will then be highlighted at a private banquet hosted by PricewaterhouseCoopers on Aug. 30 (Thursday) in Dublin, and the award will be presented at the Pre-Game Tailgate at the UCD Bowl Stadium before Notre Dame plays Navy at the Aviva Stadium on Sept. 1. PLC will offer a special presentation to Dublin-area coaches, teachers and students, and the traveling GIFT schools’ families and staff will also be invited.

“As a Notre Dame alum and Monogram Club member, I was impressed when the Play Like a Champion Today program was first initiated in 2006,” said Global Football President Patrick Steenberge. “I have followed with keen interest their development and impact on student athletes, coaches and families across America, and am extremely proud to have them now as a working partner in Ireland for the Global Ireland Football Tournament.

“Together we will work to carry their positive message overseas, and recognize one top player per participating GIFT team for his character, then name one of them with the PLC/Global Football Character Award for GIFT 2012.”

Kristin Sheehan, former Notre Dame cheerleader and ND Monogram winner, is the program director for PLC. She said: “Sport provides an ideal setting to develop the moral and spiritual character of young people. The PLC Character Award will applaud student athletes who possess and demonstrate the soul of a champion.

“These athletes are driven team leaders, disciplined and focused in their sport and respected by their team and larger community for their teamwork, integrity and service. Play Like a Champion Today is honored to share our champion philosophy with coaches, parents and athletes in Ireland through partnership with Global Football, a true champion-centered program.”

Three American football showcases featuring a total of 12 teams from Arizona, California, Connecticut, Illinois, Pennsylvania, Ohio, Texas and Wisconsin will be played at Parnell Park in Dublin, Páirc Tailteann in Navan, and at a third venue still to be announced as part of the GIFT 2012 event. The games will be played on Aug. 31 at 4 p.m. and 7:30 p.m., on the eve of the Emerald Isle Classic at the AVIVA Stadium between Notre Dame and Navy.

Tickets for all GIFT 2012 events, which each offer six hours worth of top-quality American football action, will go on sale March 15, priced 15 euros for adults and 10 euros for students, with free admission for children age 12 and younger.

An innovative coach and parent education program that is transforming the culture of sports today, Play Like A Champion Today offers an athlete-centered, research-based approach to coaching and sport parenting by offering interactive coach clinics, parent workshops and athlete character-building initiatives.

A leader in university and sports travel management, Anthony Travel plays a critical role in the success of the Emerald Isle Classic and Global Ireland Football Tournament and is providing more than 10,000 guests with comprehensive travel solutions to Ireland.