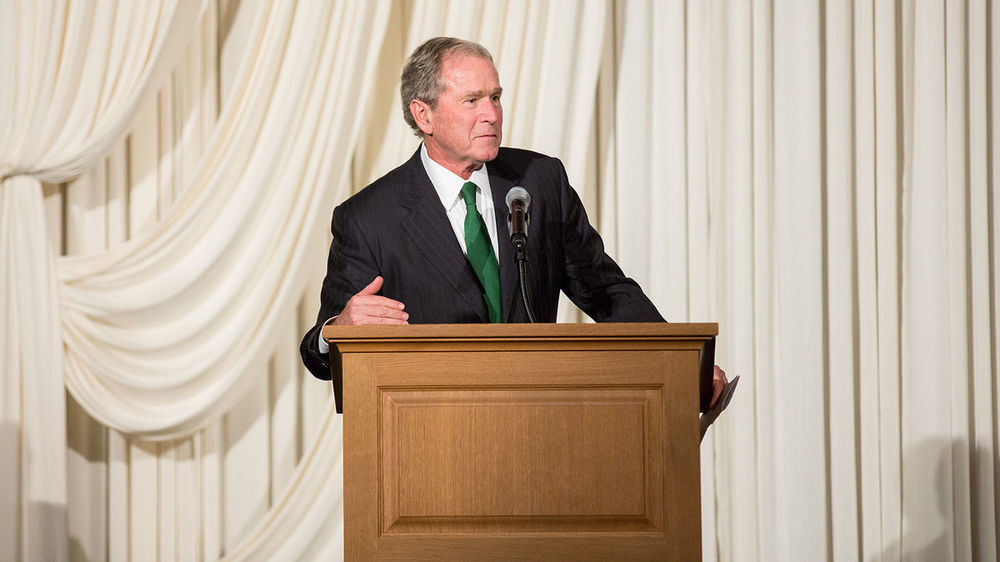 Former President George W. Bush and former first lady Laura Bush participated Friday night in the dedication of O’Neill Hall at the University of Notre Dame. The Bushes are longtime friends of Joseph I. O’Neill III, for whom the building is named, and his wife, Jan.

It was the former president’s sixth visit to Notre Dame, most notable among them May 20, 2001, when he received an honorary degree and served as the principal speaker at Notre Dame’s 156th Commencement. In what was his first presidential commencement address, he delivered what was then his most forceful message on faith-based initiatives, saying, “Government should never fund the teaching of faith, but it should support the good works of the faithful.”

Prior visits included attendance at two football games and on March 7, 1980, when he spoke on behalf of his father’s presidential candidacy at the University’s Mock Republican Convention. As president, Bush delivered a speech March 4, 2005, at the Joyce Center on Social Security reform.

A 1967 graduate of Notre Dame, Joseph O’Neill has served as a member of the University’s Board of Trustees since 2001. He is managing partner of O’Neill Properties Ltd. in Midland, Texas.

The 100,000-square-foot, seven-story O’Neill Hall is located on the south side of Notre Dame Stadium and was made possible by a gift to the University from Helen Schwab and her husband, Charles, in honor of her brother.