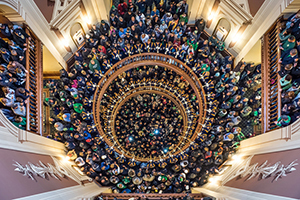 Trumpets Under the Dome

Lectures on St. Maximilian Kolbe, the Saint of Auschwitz, and on protein folding, along with performances by the Band of the Fighting Irish and the Notre Dame Glee Club, are among the attractions for visitors coming to campus for this weekend’s football game against Stanford University.

For a complete schedule of events, visit gameday.nd.edu.