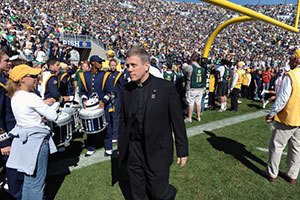 Rev. Mark Thesing, C.S.C., has been appointed chaplain of the University of Notre Dame football team

Father Thesing is the director of finance and administration in the Mendoza College of Business and has served as the road game chaplain for football for the past four seasons. Father Doyle, the rector of Dillon Hall, has been the team chaplain since 2001.

“Father Mark Thesing is no stranger to our football team,” head coach Brian Kelly said. “He has the respect and admiration of our players and staff, and we are proud to have him serve in this important role within our program.

“At the same time, we want to thank Father Doyle for his service as chaplain. For more than a decade, he has been a true blessing to Notre Dame football players, coaches and staff.”

In addition, the Office of Campus Ministry is moving the pregame Mass for the Irish football team to Fridays as a private service for the players, coaches and staff.

“With the many obligations in the classroom, on the field and surrounding game days, we believe this change will significantly enhance the worship experience and better meet the spiritual needs of the team,” said Rev. James King, C.S.C., director of Campus Ministry.

The team’s pregame walk will continue to originate from the Guglielmino Athletics Complex to the library quad and on to the stadium beginning at 1:30 p.m. on game days.