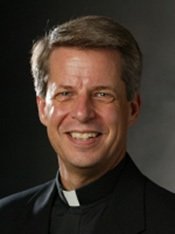 Father Poorman’s responsibilities in the newly restructured position will include general oversight of the divisions of university operations, financial affairs, university relations, and supervision of the student life division.

“Father Poorman is a gifted administrator, an accomplished faculty member and award-winning teacher, as well as a devoted priest in the Congregation of Holy Cross,” Portland’s president, Rev. E. William Beauchamp, C.S.C., said. “I am delighted he has accepted the invitation to join the University of Portland community to provide his distinguished leadership in this important role.”

“I’m grateful, honored and excited to accept this wonderful opportunity from Father Beauchamp to serve the University of Portland,” Father Poorman said. “Having been a member of the University’s Board of Regents for the past seven years, I’ve been deeply impressed by the outstanding faculty, staff and students at UP, and I look forward to contributing to its promising future as an eminent institution of Catholic higher education.”

Notre Dame’s president, Rev. John I. Jenkins, C.S.C., added: “Father Poorman has proven himself a dedicated leader in his work as a Holy Cross priest, administrator and faculty member at Notre Dame, and all of us here are most appreciative of his wonderful service. The prayers of our community travel with him to Portland, where I am confident his talents and experience will be enormously beneficial to the students, faculty and leadership at another exceptional Holy Cross university.”

Notre Dame and Portland were founded by the Congregation of Holy Cross in 1842 and 1901, respectively.

As vice president for student affairs from 1999 until earlier this year, Father Poorman was responsible for the oversight of Notre Dame’s residential life and a variety of student services, activities and programs, including Campus Ministry, multicultural and international student affairs, student activities, Notre Dame Security Police, counseling and health services, career and placement services, alcohol and drug education, and the Gender Relations Center.

During his tenure as vice president, Father Poorman led student affairs through a period of growth and development in numerous areas, including the integration of academics and residential life, the enhancement of programs and activities contributing to campus social life, ongoing efforts to welcome and retain a diverse student body, and continuous improvement of a broad range of services to students. He also had oversight for capital projects, including the construction of the Ryan and Duncan residence halls, a total renovation of St. Liam Hall for campus health and counseling services, the construction of Coleman-Morse Hall as the home for Campus Ministry and Hammes Mowbray Hall for the Notre Dame Security Police Department, and the establishment of the Legends restaurant and nightclub.

A native of Phoenix, Father Poorman grew up in Bakersfield, Calif., and Springfield, Ill. He was graduated Phi Beta Kappa with a bachelor’s degree in English from the University of Illinois in 1976. He earned his master of divinity degree from Notre Dame in 1980 and professed his final vows in the Congregation of Holy Cross in 1981. Ordained a priest in 1982, he served for the next three years at Notre Dame as rector of Dillon Hall and associate director of Campus Ministry. He then pursued graduate studies at the Graduate Theological Union in Berkeley, Calif., where he earned his doctorate in Christian ethics in 1990.

Father Poorman’s teaching and research concern moral theology and its pastoral applications. His undergraduate courses survey contemporary issues in Christian ethics while his graduate courses are concerned with Christian ethics, Catholic moral teaching and pastoral practice. Father Poorman is the recipient of the University’s Kaneb Teaching Award and Edmund P. Joyce Undergraduate Teaching Award. Among the subjects on which he has written and lectured are medical ethics, sexuality, Christian ministry, and Catholic higher education. He is the author of “Interactional Morality” and editor of “Labors from the Heart,” a collection of essays on mission and ministry at Notre Dame. While serving full time on the faculty, he directed the Department of Theology master of divinity program for seminarians and lay ministers.

Father Poorman was elected Senior Class Fellow by the graduating classes of both 1997 and 2007, he received the University’s William A. Toohey, C.S.C., Preaching Award in 2005, and he was the recipient this year of the John “Pop” Farley, C.S.C., Award for distinguished service in student life. In addition to Portland’s board, he also serves on the boards of Stonehill College, King’s College and the University of Notre Dame-Australia, and he recently was elected chairman of the Board of Trustees of Saint Joseph Regional Medical Center in Mishawaka, Ind. He resides on the Notre Dame campus as chaplain-in-residence in Keough Hall, an undergraduate residence hall.