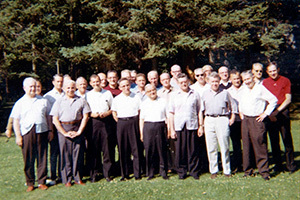 Photo provided by the University Archives

The University of Notre Dame’s Cushwa Center for the Study of American Catholicism, in collaboration with the Office of the President, will host four Catholic university presidents on Sept. 5 (Tuesday) for a lecture and panel to commemorate the 50th anniversary of the drafting and signing of the Land O’Lakes Statement.

John T. McGreevy, I.A. O’Shaughnessy Dean of Notre Dame’s College of Arts and Letters and professor of history, will deliver a talk from 4 to 5 p.m. in McKenna Hall Auditorium on the history and impact of the Land O’Lakes charter on Catholic higher education.

Land O’Lakes’ central articulation of the need for academic freedom and institutional autonomy challenged Catholic universities to aspire to excellence in all their endeavors. Informed by the teachings of the Second Vatican Council, the statement also affirmed that Catholicism — “perceptibly present and effectively operative” in a campus community — distinctly enhances a modern university’s capacity for such excellence.

“Most American Catholic colleges and universities were founded in the 19th century,” McGreevy said, “and then renewed in the context of the Second Vatican Council and the 1960s. The Land O’Lakes statement was part of that renewal and it makes sense to reflect upon the document and see how and if it speaks to our own era.”

As Father Jenkins wrote in a July 2017 essay published in America magazine, “From the perspective of 50 years on, with new controversies and a very different papacy, we can perhaps better understand the context, vision, limitations and legacy of the Land O’ Lakes Statement for Catholic higher education and for the Church generally.”

The lecture and panel discussion are free and open to the public.