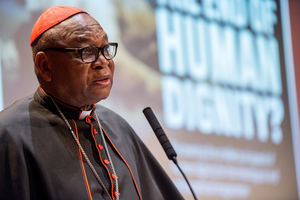 “From the religious point of view, one would have thought that all the beautiful holy injunctions of the holy books would have been sufficient to guide humanity in the right direction,” Cardinal Onaiyekan said. “Unfortunately, however, the reality is often different. Human beings don’t often do the right thing even if they know it. That is why many of the issues raised above which are condemned by the law of God continue to be part and parcel of our human experience. There is an insidious and negative impact of religion in this regard when people tend to put God over and against man and thereby find excuse for denying human dignity on the ground that God must be respected and worshiped.

“It is as if there is a competition between God and his human creatures for respect and dignity. How many holy wars have we not seen in history where people take up arms and claim they are fighting in the name of God? And in those so-called holy wars, human beings are destroyed. Saint Pope John Paul II has rightly observed that it is blasphemy to kill in the name of God. This is a far cry from the days when popes and men of God exhorted Christian knights to go on armed crusades, to re­conquer the holy lands from ‘infidels.’”

Cardinal Onaiyekan, well-known for his advocacy of peace in Nigeria and dialogue between Christians and Muslims, was created a cardinal by Pope Benedict XVI in 2012 and was that same year a candidate for the Nobel Peace Prize together with Alhaji Muhammad Sa’ad Abubakar, the Muslim Sultan of Sokoto, whom he had joined to promote numerous initiatives to combat fundamentalism in Nigeria.

“Many wars have been and are still being justified on the basis of a ‘jihad’ for God’s sake, or on the flimsy principles of a just war,” Cardinal Oaiyekan said. “Volumes have been written on the ‘just war theory,’ with grounds that are getting less and less tenable in the circumstances of our contemporary world. The very cautious position of the Catechism of the Catholic Church on this matter deserves every attention.”

Cardinal Onaiyekan’s lecture, “From Human Race to Human Family,” opened a three-day interdisciplinary conference, titled “The End of Human Dignity? Recovering the Intellectual Appeal of Human Dignity for the Theological and Philosophical Imagination.” The conference, sponsored by Notre Dame’s Institute for Church Life, featured a range of scholars defending the concept of human dignity against recent philosophical attacks.