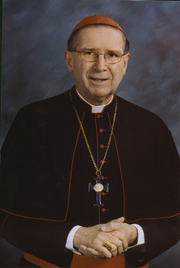 Cardinal Roger M. Mahony, archbishop of Los Angeles, will give a lecture titled “Fostering the Baptismal Priesthood in the ‘Year for Priests’” at 4 p.m. Sept. 18 (Friday) in the auditorium of the Hesburgh Center for International Studies at the University of Notre Dame.

Following the Second Vatican Council there has been a rediscovery in Catholic theology of baptism as the foundational sacrament of ministry, and a clearer recognition that ministry is not just for the ordained. The Second Vatican Council related the baptismal call, the vocation of the baptized, and the office of the ordained to the mystery of Christ, finding in each a reflection of the threefold office of Christ priest, prophet and king. Every vocation and every ministry is rooted in the same reality of Christ and his presence by the gift of the Spirit in the Church.

Responding to Pope Benedict XVI’s invitation to reflect on the priesthood during this “Year for Priests,” and drawing from his own recent pastoral letter on ministry, “As I Have Done for You,” Cardinal Mahony will identify the foundations for a baptismal priesthood and a ministerial priesthood suited to meet the pressing needs of the Church today.

One of the cardinal electors participating in the 2005 conclave that selected Pope Benedict XVI, Cardinal Mahony serves on several committees of the United States Conference of Catholic Bishops, including those for Liturgy and Pro-Life Activities.

Cardinal Mahony’s lecture is sponsored by the office of Notre Dame’s president, Campus Ministry, the Center for Social Concerns and the Department of Theology.