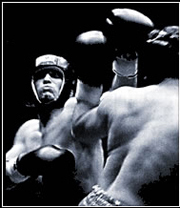 Mark Weber, a 2009 University of Notre Dame graduate, describes Notre Dame’s annual Bengal Bouts boxing tournament not in terms of rings and gloves but as “a great tradition of young men giving their blood and sweat in the fight against global poverty.”

A double major in film, television and theatre (FTT) and the Program of Liberal Studies – as well as the 2008–09 Bengal Bouts president – he has teamed with FTT faculty member William Donaruma to produce “Strong Bodies Fight,” a documentary about the distinctive program (www.strongbodiesfight.org). The title is inspired by the bouts’ longtime mantra: “Strong bodies fight, that weak bodies may be nourished.”

Starting with the first tournament 79 years ago, all proceeds from Bengal Bouts ticket sales—more than $50,000 in 2009—have been directed to the Holy Cross Missions in what was once called East Bengal and today is Bangladesh. Part of the work of the Congregation of Holy Cross, Notre Dame’s founding religious community, the missions spearhead a variety of educational and outreach initiatives in the impoverished country.

Weber thought a film about the tie that binds Notre Dame’s student boxers to the missions would raise awareness of the Holy Cross programs and how to support them. His original intent was to go to Bangladesh by himself with a small handheld camera and shoot footage for a “mini-documentary,” but that plan grew to include four of his teammates.

“As a student, I saw the potential to provide a tremendous educational experience for our boxers,” Weber said. “As the president of Bengal Bouts, I saw the opportunity to transform our connection with Bangladesh from a mere check into a real relationship.”

Fellow boxers weren’t the only people interested in adding their names to the lineup. Weber approached Donaruma about the project around the same time he began discussing it with his peers, and Notre Dame alumnus John Klein later joined the crew as cinematographer.

The group traveled to Bangladesh in May 2008 with three high-definition cameras in tow, the filmmakers capturing the boxers’ journey as they met those who work in the missions and the people they serve. Back at Notre Dame, Donaruma guided the transformation from raw footage to finished film, as he and Weber combined elements of the trip and the bouts themselves to create what is now a feature-length documentary.

“The most rewarding part of the project,” Donaruma says, “has been the experience of visiting that region of the world and that we seemed to really capture an essence of hope, pride and beauty of the country and not just the idea of despair.”