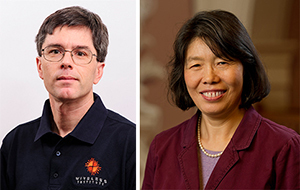 Patrick Fay and Xiaobo Sharon Hu, faculty in the College of Engineering at the University of Notre Dame, have been named fellows of the Institute of Electrical and Electronics Engineers (IEEE). The grade of fellow is the highest grade of membership conferred by the IEEE Board of Directors upon an individual member. It is bestowed in recognition of outstanding accomplishments in fields related to the IEEE. Fewer than 0.1 percent of voting members are selected annually for this honor.

Recognized by the IEEE “for contributions to compound semiconductor tunneling and high-speed device technologies,” Fay’s interests include the design, fabrication and characterization of microwave and millimeter-wave electronic devices and circuits, as well as high-speed optoelectronic devices and optoelectronic integrated circuits for fiber optic telecommunications. His research also includes the development and use of micromachining techniques for the fabrication of microwave components and packaging.

Fay, who holds seven patents with several more pending, is a member of Eta Kappa Nu, as well as a member of the IEEE’s Electron Device and Lasers and Electro-optics societies and the Microwave Theory and Techniques Society. He has contributed nine book chapters, more than 125 refereed papers and more than 125 conference papers, and serves as an IEEE Electron Devices Society Distinguished Lecturer.

Hu, who is being recognized for her “contributions to resource management for embedded systems,” joined the University in 1996. She serves as a professor of computer science and engineering, as well as electrical engineering, and leads the Embedded System Design Group. She also has served as director of graduate studies for computer science and engineering, senior assistant provost for internationalization and associate dean for professional development in the Graduate School.

Best known for her work in power-aware resource management for real-time embedded systems, which has led to fundamental advancement in the understanding of the interplay between real-time performance and energy consumption in such systems, her research in hardware accelerator design of embedded systems has resulted in better medical treatment for cancer patients. She has also been actively engaged in exploiting emerging devices for low-power and secure hardware applications.

She is the co-inventor on four patents and has several pending, and has published more than 250 journal and conference papers Additionally, Hu received the National Science Foundation (NSF) CAREER Award in 1997. Currently serving as the TPC 2016 program chair, she served as co-chair of the Design Automation Conference in 2014 and 2015. She has also served as associate editor for IEEE Transactions on VLSI, ACM Transactions on Design Automation of Electronic Systems, and ACM Transactions on Embedded Computing Systems.

With 400,000 members in 160 countries, the IEEE is the world’s leading professional association for the advancement of technology for humanity, encompassing aerospace systems to computers and telecommunications, as well as biomedical engineering, electric power and consumer electronics. The association publishes 30 percent of the world’s literature in the electrical and electronics engineering and computer science fields.