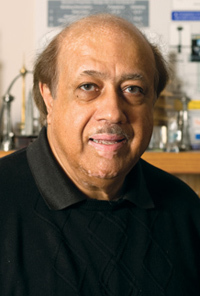 Ahsan Kareem, the Robert Moran Professor of Civil Engineering and Geological Sciences at the University of Notre Dame, has been named an honorary professor in the Department of Bridge Engineering at Tongji University. Located in Shanghai, it is one of the oldest and most prestigious institutions of higher education in China. He is the first Notre Dame faculty member and only the fifth civil engineering (bridge) expert to have received this honor.

A faculty member since 1990, Kareem serves as the director of Notre Dame’s NatHaz Modeling Laboratory, where he specializes in probabilistic structural dynamics, fluid-structure interactions, structural safety, and the mitigation of natural hazards. He uses computer models and laboratory and full-scale experiments to study the dynamic effects of environmental loads under winds, waves and earthquakes on structures and to develop mitigation strategies to enhance the performance and safety of structures, as well as to better understand and predict the impact of natural hazards on the constructed environment. 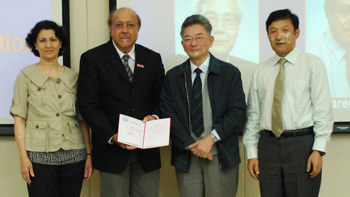 Kareem’s research has made a major impact in advancing the state-of-the-art in wind effects on structures through the characterization and formulation of wind load effects. He has spearheaded redevelopment of American Society of Civil Engineers (ASCE) standards for wind-sensitive structures — specifically ASCE 7, which outlines the minimum design loads for the safety of buildings and other structures, such as bridges — and advancement of the code’s global implementation as a benchmark standard. His work has led to the development of e-technologies for web-enabled analysis and design of structures and establishment of a cyber-based collaboratory for research and education in wind effects.

Beyond his research, Kareem has distinguished himself as a leader within the structural engineering community through his service as first president of the American Association for Wind Engineering, service as editor-in-chief of the International Journal of Wind and Structures, associate editor of the Journal of Structural Engineering and Journal of Engineering Mechanics and service on many advisory panels of the National Research Council, National Science Foundation and industry.

Among his most recent honors are selection as an ASCE distinguished member, election as a member of the U.S. National Academy of Engineering and a foreign fellow of the Indian National Academy of Engineering, receipt of the ASCE’s State-of-the-Art award for scholarly contributions to full-scale monitoring of tall buildings and selection as the inaugural recipient of the Alan G. Davenport Medal, presented by the International Association for Wind Engineering in recognition of his distinguished achievement in the dynamic wind effects on structures.