The University of Notre Dame celebrated its 172nd Commencement Ceremony Sunday (May 21) inside the Notre Dame Stadium, with an audience of approximately 24,000 family, friends, faculty and graduates. 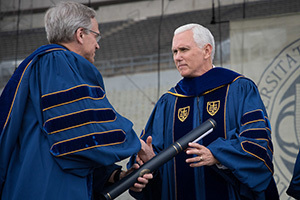 The ceremony began an hour later than originally scheduled, to keep the celebration in the stadium and avoid rain, which fell even as guests arrived to watch their graduates take to the field. As all 2,081 degrees were conferred and President Rev. John I. Jenkins, C.S.C., issued his charge, thick, stubborn clouds that had been present for most of the morning finally parted, allowing the sun to shine down on the Class of 2017.

“I have great weather news,” said Thomas Burish, Charles and Jill Fischer Provost of the University, as the ceremony began. “Father John has decreed no more rain today.”

Salutatorian and Hesburgh-Yusko Scholar Jose Alberto Suarez offered the commencement invocation to the graduating class, and valedictorian Caleb “C.J.” Pine encouraged the Class of 2017 to give of themselves and be of service to others and of service to justice during the valedictory address.

“Our calling as we leave this stadium is to get these gowns dirty together, as we wade into muddy waters, as our learning becomes service to justice,” Pine said. “When we follow the deeper callings of justice and proclaim the deeper magic of love and sacrifice that connect all of us – no matter which corner of the world we come from, then we will be true to what we have learned at Notre Dame. Then we will be true to our humanity, to the person that God has called each of us to be.”

Pine, a Truman Scholar and Gilman Scholar, member of the Glynn Family Honors Program and a Hesburgh-Yusko Scholar, spoke about how his experience as a student at Notre Dame shaped his vision for life, as well as the deeper magic and transformative power that comes with being a Notre Dame graduate. Pine also encouraged the Class of 2017’s Fighting Irish to fight for others.

“As you and I leave this stadium, we must fight for others, for their unalienable rights, so that their future becomes their own,” Pine said. “Our generation must stand against the scapegoating of Muslims. Our concern for freedom of religion must mean freedom for all religions, not just our own, otherwise none of us is free. We must commit ourselves to make certain that all of our friends and classmates at Notre Dame receive equal rights and respect when they leave this stadium with us.”

In his introduction of Vice President Mike Pence, Father Jenkins also recognized the reality of “a fractured nation, with deep divisions and raw political feelings,” in the midst of difficult times.

“Because values some hold deeply are often pitted against those others hold just as deeply, and because the decisions before us are so consequential, our debates are passionate and political contests intense.”

Jenkins urged those listening to strive for something higher, embracing ideas and listening to differing views.

“We must speak the truth we know and challenge the injustice we see,” he said. “But we must also listen to those who disagree, care for the bonds that join us together and find ways to build a society where all can flourish – even the people who don’t look like us, think like us, or vote with us.”

Pence was the first U.S. vice president to deliver the commencement address at Notre Dame. 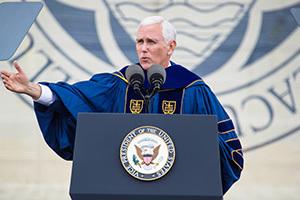 “For this son of Indiana, it is great to be back home again,” he said. “But I have to tell you, it’s deeply humbling for me to participate in the 172nd Commencement here at the University of Notre Dame in her 175th year.”

He noted that the accomplishment of those graduates receiving their degrees was a feeling shared by their parents who had supported, encouraged and prayed for them as they pursued their education. “My charge to all of you is simply this,” he said, “be exceptional from this day forth.”

The vice president urged graduates to carry the values and ideals students had learned during their time at Notre Dame into their future lives and careers; to be leaders in their communities, families and professional fields; and to hold on to the Catholic faith and values instilled in them.

“If you hold fast to Him, to the faith you’ve deepened in this place and to all you’ve learned and the examples you’ve seen, I know you will not only persevere, you will prevail, and you will lead your families, your professions and our country to unimaginable heights. University of Notre Dame Class of 2017, this is your day. So go, Irish. The future is yours.”

Approximately 100 graduates left the ceremony in protest during the vice president’s speech. 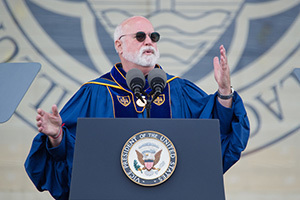 Boyle’s impassioned speech elicited laughter and tears from the crowd.

“You know, what Martin Luther King says about church could well be said about your time here at Notre Dame,” he said. “‘It’s not the place you’ve come to, it’s the place you go from,’ and you go from here to create a community of kinship such that God, in fact, might recognize it. You imagine with God a circle of compassion and then you imagine nobody standing outside that circle. You go from here to dismantle the barriers that exclude.”

The ceremony concluded with a charge by Jenkins, who echoed the sentiments of previous speakers and implored the Class of 2017 to continue the Notre Dame tradition.

“Take what you have learned here at Notre Dame and let it enable you to go forth and do good,” he said. “Always be generous as you can with you time, talent and all you have. In your family life, your professional life and your spiritual life, every day of your life, never forget that your charge as Notre Dame graduates is to be a force for good.” 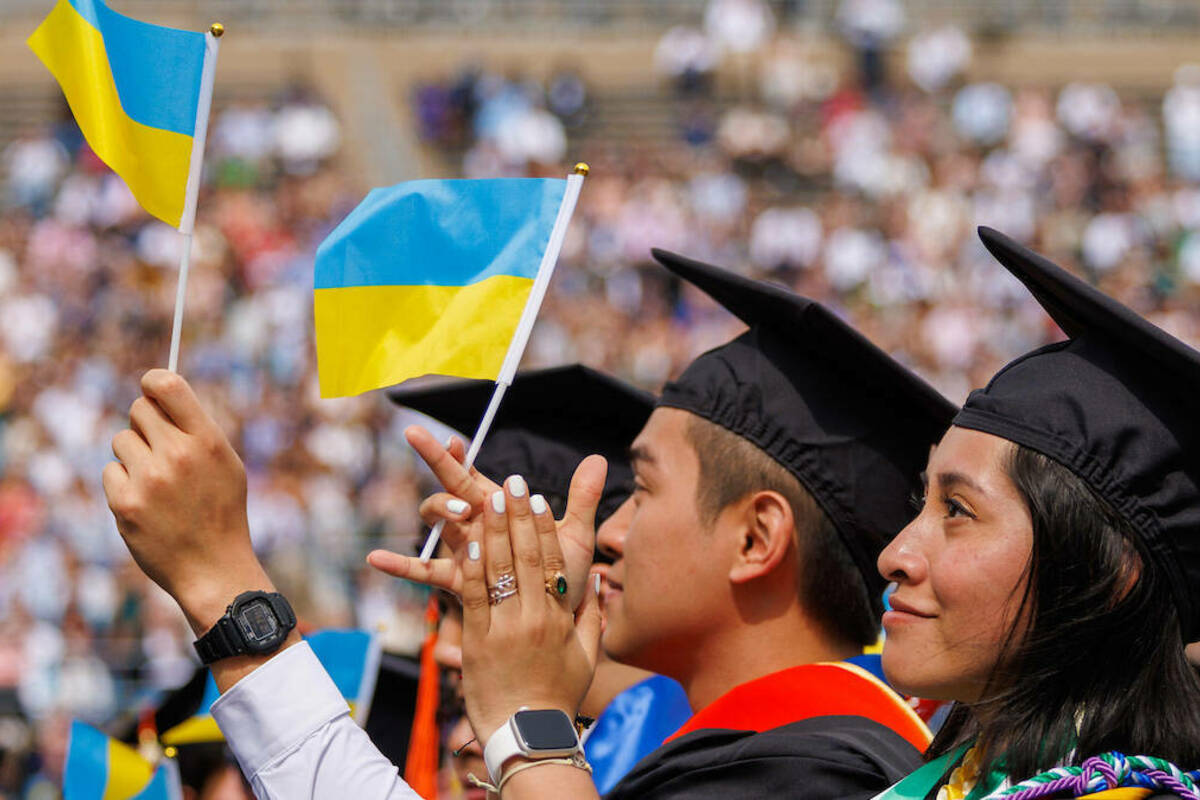 The Commencement of the class of 2022