Vice President Pence, Mr. Jack Brennan, Chair of the Board of Trustees and members of the Board, Father Malloy, faculty, staff, alumni, parents and friends and, most of all, graduates of the class of 2017. 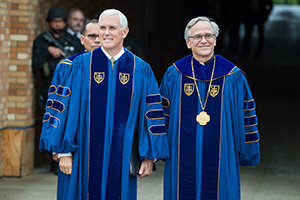 The beloved Pope and Saint John XXIII once wrote:

“Human society can be neither well-ordered nor prosperous unless it has some people invested with legitimate authority to preserve its institutions and to devote themselves so far as necessary to work and care for the good of all.” These words of Pope John can perhaps be paraphrased less formally, by saying that political leaders are necessary for society, and we must strive with them to serve the common good. In that spirit, the University of Notre Dame has invited political leaders to campus, often to speak at our Commencement Exercises, and we proudly do so today, as we celebrate the University’s 175th anniversary.

Yet we do so today in particularly difficult times, as a fractured nation, with deep divisions and raw political feelings, confronting challenges that demand from us near-Solomonic wisdom.

Because values some hold deeply are often pitted against those others hold just as deeply, and because the decisions before us are so consequential, our debates are passionate and political contests intense.

And too often, as a result, the love that fires our passion is twisted into a hatred for those who disagree. Speaking only to the like-minded, we question first the motives and then the character of those who differ. Opposition to their views becomes opposition to them. And so we dismiss an opponent’s views before taking time to listen and understand. When that happens, persuasion is impossible, and dialogue pointless. Our public life then is no longer a collective effort to serve the common good, but a bitter fight to vanquish opponents.

At Notre Dame, we must strive for something higher. We must speak the truth we know and challenge the injustice we see. But we must also listen to those who disagree, care for the bonds that join us together and find ways to build a society where all can flourish – even the people who don’t look like us, think like us, or vote with us.

Our Commencement speaker today has given his life to serving the common good in political office.

Mike Pence was one of six children born into what biographers would call “a large Catholic family.” In the Jenkins household we would call it mid-sized.

Growing up in Columbus, Indiana, Mike Pence had the good fortune to be surrounded by supportive examples of responsibility and ambition. His parents were role models. His grandfather, Richard Michael Crawley, emigrated from Ireland to Chicago, where he worked for the transit authority for 40 years, and taught the young Mike Pence that in America anything is possible.

He met his wife, Karen, in law school. Anyone who has spent any time with the couple, cannot but be impressed by the respect and love that they show one another.

As a candidate, Mike Pence would describe himself as “a Christian, a conservative, and a Republican in that order.”
The distinction served him well.

He was first elected to Congress in the year 2000. Eight years later, a national magazine surveyed all 535 members of the House and Senate about their legislative colleagues. Just 10 were identified as the best members of Congress.

Mike Pence was among them.

The magazine concluded, “From immigration to earmarks, Pence is one of the most principled members, from either party, and his unalloyed traditional conservatism has repeatedly pitted him against his party elders.”

As governor, Mike Pence wanted nothing more than to guarantee for his state a prosperous future after the crushing collapse of the industrial Midwest. I know from personal experience how very hard he worked to bring Notre Dame and other universities into partnership with the state so that our research would translate into jobs and opportunities for state residents; so that young men and women would not have to uproot and leave home to make a living.

As vice president, Mike Pence has been a voice of balance, reason and continuity. He has played a critical role in shaping the domestic agenda and travelled the globe to reassure allies and show to foes a steady resolve.

Even those who disagree with Mike Pence recognize him as a man of principle. I do as well, and am proud to call him a friend.
On behalf of the University of Notre Dame, we are honored to welcome the 50th governor of our state and the 48th vice president of the United States, Michael Richard Pence.