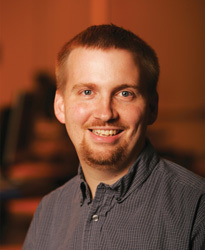 Aaron Striegel, associate professor of computer science and engineering at the University of Notre Dame, has been selected as one of the nation’s 65 most innovative young engineering educators. These early career faculty members, who have already been honored for their development and implementation of novel educational approaches in a variety of engineering disciplines, will participate in the National Academy of Engineering’s (NAE) 3rd annual U.S. Frontiers of Engineering Education Symposium.

Scheduled for Nov. 13 to 16 in Irvine, Calif., this year’s program will focus on teaching leading-edge engineering knowledge, project-based learning, active and self-directed learning, and assessment of student learning and education innovation.

“In our increasingly global and competitive world, the United States needs to marshal its resources to address the strategic shortfall of engineering leaders in the next decades,” said Edward F. Crawley, Ford Professor of Engineering at Massachusetts Institute of Technology, and the chair of the FOEE planning committee. “By holding this event, we have recognized some of the finest young engineering educators in the nation, and will better equip them to transform the educational process at their universities.”

In addition to receiving the Faculty Early Career (CAREER) Award from the National Science Foundation in 2004, Striegel has received research excellence and teaching excellence awards from Iowa State University, a new faculty fellow grant from Frontiers in Education and a Notre Dame Computer Science and Engineering faculty award for teaching.

He was recognized with an Early Career Award by the Iowa State Electrical and Computer Engineering Department in 2010. Striegel is also a senior member of IEEE and a member of the American Society for Engineering Education.

Established in 1964, the NAE is an independent, nonprofit institution that serves as an adviser to government and the public on issues in engineering and technology. Its members consist of the nation’s premier engineers, who are elected by their peers for their distinguished achievements.