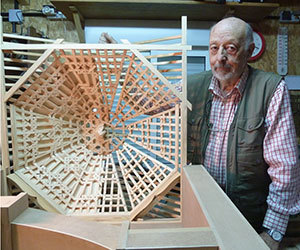 In recognition of his research and leadership in the recovery of traditional Spanish carpentry methods, architect Enrique Nuere will receive the 2016 Rafael Manzano Prize for New Traditional Architecture, presented by the University of Notre Dame School of Architecture in partnership with the Richard H. Driehaus Charitable Lead Trust.

Nuere will be presented with €50,000 and a commemorative medal at a ceremony on Oct. 19 (Wednesday) at the Royal Academy of Fine Arts of San Fernando in Madrid. Born in Valencia, Nuere is best known for his coffered ceiling lazed carpentry work, which was informed by his research into the original geometric rules described in 17th-century manuscripts on carpentry techniques. Through his studies, Nuere recovered the craft of the carpinteros de lo blanco – or construction carpenters – which had been lost in the 18th century. Nuere’s most notable works include the new ceilings of the galleries of the Patio del Alcázar in Toledo, the framework of the auditorium of the University of Alcalá de Henares, the framework of the Buenavista Palace in Malaga, which has become the Picasso Museum, and the ceiling frameworks of the Miguel Mañara Palace in Seville.

“Enrique Nuere has maintained, nurtured and carried the flame of traditions and culture forward so that the next generation can accept them as their inheritance, thus ensuring that the cycle of tradition and craft begins again on a basis of knowledge and wisdom,” said Michael Lykoudis, Francis and Kathleen Rooney Dean of the School of Architecture. “This is the true sustainability; a real investment in the future. His work is an act of faith in the future, a commitment to the cities and countryside of his native Spain and an act of courage as a citizen of the world.”

Richard H. Driehaus, founder, chairman and chief investment officer of Chicago-based Driehaus Capital Management LLC, said, “As we mark the fifth anniversary of the Manzano Prize, it is fitting that we recognize the pioneering work of Enrique Nuere who, as an architect, preservation advocate, scholar and practitioner of a nearly-lost traditional craft, has changed the course of history. By sharing his knowledge and teaching a new generation of carpinteros de lo blanco, in the ancient techniques while taking advantage of modern materials and technology, he has single-handedly ensured that this aspect of Spain’s cultural heritage will survive for centuries to come.”

In conjunction with the prize ceremony, a two-day seminar will be held with the theme Architecture and Traditional Building Crafts. The seminar’s topic was selected to respond to and make manifest Nuere’s work. Presentations on traditional building crafts from different regions and cultures will be showcased.

The Manzano Prize recognizes the work of architects who defend and preserve vernacular architecture and reinforce Spain’s unique architectural heritage. The award is named after Rafael Manzano Martos, who was awarded the 2010 Richard H. Driehaus Prize at the University of Notre Dame. Manzano is an architect who has devoted his professional life to the preservation of the architectural and urban heritage of Spain through both the restoration and the design of new architecture based on this heritage.