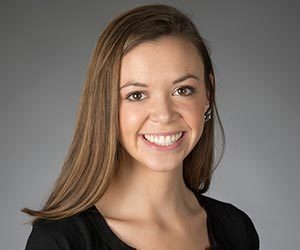 Cassidy McDonald, a University of Notre Dame senior from Madison, Wisconsin, is one of 18 future leaders to be named a 2017-18 Luce Scholar.

The Luce Scholarship is a nationally competitive fellowship program created by the Henry Luce Foundation in 1974 to enhance understanding of Asia among potential leaders in American society. Luce Scholars are provided stipends, language training and individualized professional placement in Asia.

“The Luce is a professional, rather than academic, scholarship, so I’ll spend the year working as a journalist,” McDonald said. “Over the next few months, the foundation will custom-tailor a placement, helping me to find a location and a job in journalism.”

Ultimately, she plans to work as a reporter, telling the stories of marginalized voices as they interact with powerful policies and systems.

McDonald will graduate in May with a business degree in marketing and a minor in journalism, ethics and democracy. In fall 2016, she traveled alongside columnist Nicholas Kristof to report on American poverty for the New York Times; she wrote about alternatives to incarceration, drug problems in Native American communities and a billionaire who is quietly donating his fortune to Oklahoma’s social programs. Her New York Times work can be found here: https://kristof.blogs.nytimes.com/author/cassidy-mcdonald/.

At a summer internship with CBS News in New York City, she worked in the shooter-producer unit and spent many of her days “in the field,” booking interviews, shooting video and solving last-minute problems. At an earlier internship with “60 Minutes” in Washington, D.C., she researched a variety of topics including Russian military capabilities, gun death statistics and Joaquín “El Chapo” Guzmán. She was its first intern to travel out of town for two shoots, coordinating interviews at FBI headquarters and in Chicago, and independently producing a shoot in West Virginia.

McDonald began her career in Madison as an intern at the local NBC affiliate, WMTV NBC15, and at Wisconsin’s second-largest newspaper, the Wisconsin State Journal. At the State Journal, she reported on gang violence, higher education and city government, and wrote seven front-page articles in her first month on the job.

At Notre Dame, she is editor-in-chief of the student newsmagazine, Scholastic, and manages a team of 24 (in addition to about 30 regular contributors) to produce a monthly glossy magazine. Recent issues have focused on the school’s sexual assault disciplinary procedures, campus-wide reactions to Donald Trump’s victory and homelessness near campus. She also worked for Notre Dame’s sports broadcasting division, Fighting Irish Media, where she co-hosted an online sports-highlight show and produced live softball broadcasts. She anchors during Notre Dame’s 24-hour webcast on Notre Dame Day and is an emcee of the school’s Advisory Council dinners, hosting dinner events for about 250 of the school’s top decision-makers.

McDonald first discovered her passion for journalism at age 17, when she got a job making videos at her local police department. This semester, she’s raising money to fund a Liberian primary school class by training for her first marathon.