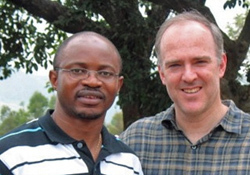 At a spiritual retreat center overlooking Bujumburu on the shores of Lake Tanganyika, Daniel Philpott, associate professor of political science at the University of Notre Dame, recently led workshops on political reconciliation for leaders of Burundi’s Catholic Church. Now at peace, Burundi is recovering from nearly five decades of ethnic violence and war.

“The Church is the strongest and most respected civil society actor in Burundi,” said Philpott, who traveled to east Africa at the invitation of Archbishop Evariste Ngoyagoye. “In a country that is 62 percent Catholic, the Church has the potential to bring its message of reconciliation into the political order.”

Reconciliation is an ancient religious concept that means “restoration of right relationships,” said Philpott, a specialist in reconciliation and faith-based diplomacy at Notre Dame’s Kroc Institute for International Peace Studies. It involves elements of healing, repentance and forgiveness, he added.

The idea of political reconciliation emerged in the late 1990s in countries like Chile and South Africa, which were rebuilding after periods of war or extreme violence, Philpott said. In a number of cases, religious communities and leaders, most famously Anglican Archbishop Desmond Tutu of South Africa, strongly encouraged and led truth and reconciliation commissions. The Church in Burundi is now examining those experiences and considering how it should be involved in Burundi’s upcoming process of truth and reconciliation, which may begin after elections in 2010.

Burundi was at war regularly between 1958 and 2003. One of the world’s poorest nations, the 10,000-square-mile country just south of Rwanda shares Rwanda’s history of violence between Tutsi and Hutu populations. The Arusha Peace Accords of 2000 brought a general settlement, although it took three more agreements before fighting stopped. The peace accords mandated a truth commission and a national special tribunal for war crimes.

Accompanying Philpott to Burundi was Father Jean Nyembo, a master’s student in peace studies at the Kroc Institute and a Jesuit priest from the nearby Democratic Republic of the Congo. Nyembo served as French-English translator and regional expert.
A member of the Notre Dame faculty since 2001, Philpott is the editor of “The Politics of Past Evil: Religion, Reconciliation, and the Dilemmas of Transitional Justice.”

More information is available on the Web at http://kroc.nd.edu.