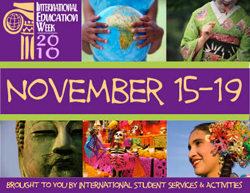 What do Asian dancers, Salvadoran papusas and a documentary about South African street soccer have in common? Each will be part of International Education Week (IEW), presented by International Student Services and Activities (ISSA) at the University of Notre Dame. Events are open to the public and will be held Nov. 15 to 19 (Monday to Friday).

Monday through Friday, ISSA will sponsor a sale of goods and handicrafts from the fair trade retailer Ten Thousand Villages, which provides vital, fair income to Third World people by marketing their handicrafts and telling their stories in North America. Ten Thousand Villages will sell products in the Hesburgh Library Atrium from 10 a.m. to 6 p.m. each day. Ten Thousand Villages, which is a non-profit program of the Mennonite Central Committee, works with artisans who would otherwise be unemployed or underemployed, providing sustainable income that pays for food, education, health care and housing.

In addition, ISSA will host an International Cooking Class on Thursday and a Late Night Salsa Nightclub in conjunction with Legends of Notre Dame on Friday for Notre Dame, Saint Mary’s and Holy Cross students.
All IEW events will support the St. Joseph County chapter of the American Red Cross, which became an authorized refugee resettlement agency in 2010. Between Oct. 1, 2010, and Sept. 30, 2011, the local Red Cross chapter expects to resettle 80 displaced refugees from around the world. Many of these refugees, who have been displaced from their home countries due to persecution for religion, race, nationality or political opinion, arrive in the United States with only the clothes on their backs. As a result, the Refugee Resettlement Program is in need of everyday household items to provide the refugees, including furnishings, linens and unused, unopened toiletries. ISSA will host donation collection boxes at all IEW events.

IEW co-sponsors include the Center for Social Concerns, Graduate Student Union, Legends of Notre Dame, and the Office of International Studies.