The University of Notre Dame’s new facility in Rome aims higher than an expansion of traditional study abroad. The new Global Gateway, in a renovated building a block from the Colosseum, will extend the University’s reach into the heart of Catholicism and create space for worldwide cultural and intellectual exchange.

The University will bless the Notre Dame Rome Global Gateway on April 9 (Wednesday) and recognize the benefactors who made this vision possible: Matthew and Joyce Walsh, Robert and Carolyn Turner and the Centioli Family Foundation.

The formal ceremonies for the blessing include a Mass at the Basilica of San Clemente and a donor recognition event and cocktail reception at the new building on Via Ostilia. Provost Thomas G. Burish and Executive Vice President John Affleck-Graves will host the events.

Architecture students and professional staff moved into the rehabilitated facility in January. The five-story stucco building features a traditional courtyard, a kitchen, two outdoor terraces, classrooms, office and meeting space, architecture and painting studios and cutting-edge technology. The previous academic building, while historic and close to the Pantheon, was overcrowded and lacked modern technology.

The new facility is considered a Global Gateway because it will allow Notre Dame to expand the architecture program, build other programs and host academic conferences, workshops, seminars and faculty or graduate students conducting research. New student programs will include resources to coordinate undergraduate internships, summer study programs and a common core course for architecture students and undergraduates studying through Notre Dame’s program with John Cabot University. 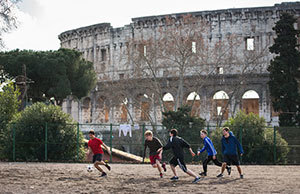 Undergraduate School of Architecture students play soccer next to the Colosseum, near the Notre Dame Rome Centre

“The concept of a Global Gateway is a portal so we can look out on the world and it can look at Notre Dame,” said J. Nicholas Entrikin, the University’s vice president and associate provost for internationalization. “It’s an opportunity to have a global footprint and let the world know more about our great research and teaching.”

The main auditorium in Notre Dame’s Rome Global Gateway, the Matthew and Joyce Walsh Aula (room in Italian), was funded and is named after benefactors who last year made a separate, $27 million gift to Notre Dame. In recognition of that gift, the University will name in their honor a new building on campus for the School of Architecture. Matt Walsh earned a bachelor’s degree in English from Notre Dame in 1968 and a law degree from Loyola University in 1972. Joyce Walsh is a graduate of Barat College. They reside in the Chicago suburb of Burr Ridge and have three grown children, Matthew IV, Sean and Erin. Both Erin and her husband, Mike Gibbons, are 1998 graduates of Notre Dame. In addition, the Walshes’ son Sean and son-in-law, Mike, both earned their EMBA degrees from Notre Dame.

After earning his law degree, Matt Walsh joined his family’s business, Walsh Construction, a Chicago firm founded by Matthew Myles Walsh in 1898. The firm has been involved in a wide range of projects, including rapid transit; highway and bridge work; educational, athletic and correctional facilities; office buildings; and wastewater and water treatment plants. It is the 15th largest contractor in the nation and employs more than 5,000 engineers and skilled tradesmen. Walsh and his brother Daniel are co-chairmen of the company. In addition to financial support of Notre Dame, Walsh has provided counsel to the University as a member and long-standing chair of the School of Architecture Advisory Council and chair of the Advisory Council Chair Leadership Group.

On the third floor of the Notre Dame Rome Global Gateway, the Turner Family Studio was underwritten by Notre Dame parents Bob and Carolyn Turner. Two of their four children, Eric and David, graduated from Notre Dame in 2008. The chairman and chief investment officer of Turner Investments, Bob Turner and his brother co-founded the company in 1990 with a few computers in a small office in Berwyn, Pa. Bob Turner is the chair of the Board of Trustees at his alma mater, Bradley University. He has served as a member of Notre Dame’s School of Architecture Advisory Council since 2007.

Notre Dame parent Gerard Centioli named the second floor terrace — the Terrazza Raffaele Centioli — with a gift through the Centioli Family Foundation. His son Lauren and daughter-in-law Rebecca graduated from Notre Dame in 2007. Introduced to the restaurant business as a child by his family, Gerard Centioli is co-founder, president and chief executive officer of the Seattle-based company ICON, which partners with leaders in the food and beverage industry to build upon and extend their original brands through multi-unit development. He is an alumnus of Gonzaga University and a member of its Board of Regents, and he previously served on the Board of Directors of the National Italian American Foundation.