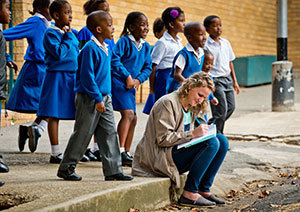 The University of Notre Dame ranks fifth nationwide in percentage of undergraduate students participating in study abroad programs among U.S. doctoral/research institutions, according to the Open Doors report released Monday (Nov. 11) by the Institute of International Education (IIE).

The report focused on study abroad activity during the fall 2011 and spring and summer 2012 semesters. The IIE reports a 65.9 percent participation rate at Notre Dame, a 6.2 percentage point increase over the 2012 results. Notre Dame jumped four spots from last year’s ninth place ranking. The University has ranked in the top 10 in the last 12 consecutive years.

Among doctoral/research institutions, the University also ranks 15th in the nation for the number of students participating in long-term (full academic year) study abroad programs and 18th for the number of students participating in mid-length (semester) programs. These rankings are calculated by the size of institution, with New York University coming in first with 388 students in long-term programs and 2,039 students in mid-length programs. Notre Dame reported 75 students and 738 students, respectively.

Participation percentages for the purpose of the Open Doors report are calculated by dividing the number of undergraduate students involved in a study abroad program by the number of bachelor degrees conferred in the time period. The IIE’s report, titled “Open Doors 2013,” showed an overall 3 percent increase from the previous year in the number of U.S. students participating in international study programs.

The Open Doors report is published by the Institute of International Education, an independent not-for-profit organization that has conducted an annual statistical survey of international students in the U.S. since its founding in 1919 and in partnership with the U.S. Department of State’s Bureau of Educational and Cultural Affairs since 1972.