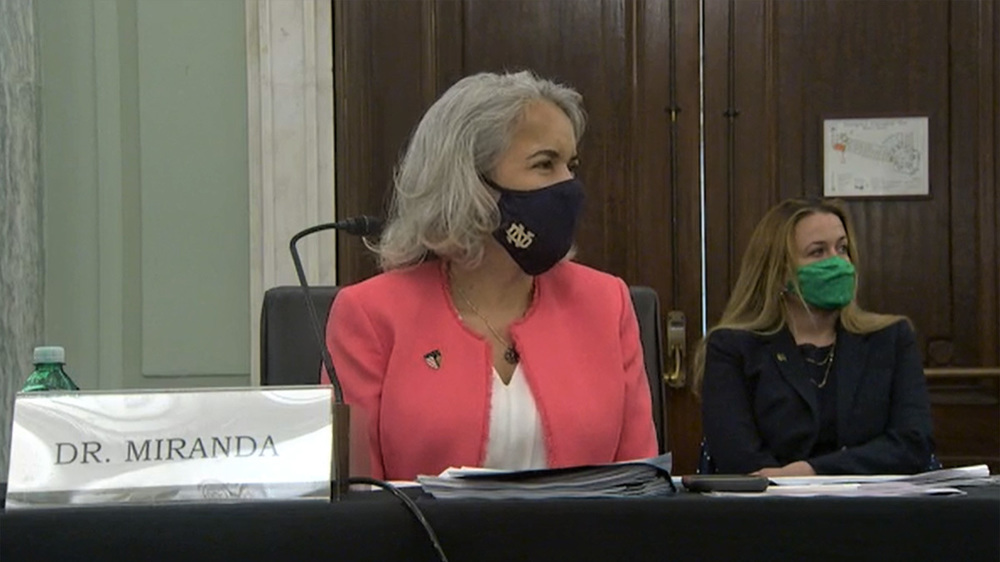 Marie Lynn Miranda, the Charles and Jill Fischer Provost at the University of Notre Dame, gives testimony at U.S. Senate.

In testimony before the U.S. Senate Committee on Commerce, Science and Transportation on Wednesday (April 14), Marie Lynn Miranda, the Charles and Jill Fischer Provost at the University of Notre Dame, said ensuring America’s national security and global competitiveness for the future requires us to attract more women and underrepresented minorities to STEMM (science, technology, engineering, mathematics and medicine) fields.

“The ability of the U.S. to meet the demand for individuals with the knowledge, skills, curiosity and creativity necessary to enter STEMM careers is hindered by the lack of women and underrepresented minorities in STEMM fields,” Miranda said. “For example, while there are about 5 million people in the U.S. employed in computing occupations, only 24 percent are women and 15 percent are underrepresented minorities.”

Miranda said it is important not to view the challenge as a STEMM pipeline with single entry and exit points and leaks along the way, but instead to recognize and support the many educational and career pathways that together are needed to create the STEMM-enabled workforce of the future.

STEMM paths range from students seeking doctorates and medical degrees to those pursuing associate degrees, she said, noting that if we fail to engage students representing that full range of interests, our nation’s STEMM workforce will be too small and lack the creativity and innovation to compete in the world.

The legislation would create a new directorate at the National Science Foundation focused on basic research and commercialization related to key technology areas with geostrategic implications for the U.S. and would invest $100 billion over five years to spur scientific exploration and development in 10 key focus areas.

The bill also would authorize $10 billion over five years for the Department of Commerce to invest in regions throughout the country to lead in technology and innovation. This includes a program to support comprehensive regional technology strategies to attract public and private investment.

At Cantwell’s request, Miranda focused her five-minute oral testimony on educational efforts to enhance the nation’s STEMM-enabled workforce and offered three specific recommendations. In her longer written testimony, Miranda offered five additional recommendations on other aspects of the proposed legislation.

In response to a question from Sen. Ted Cruz (R-Texas), Miranda discussed the need to balance protecting sensitive research and intellectual property from exploitation by foreign governments with the need to welcome talented students and faculty members from around the globe who contribute significantly to America.

Other witnesses at the hearing were:

A video of the full hearing is available on the committee’s website.