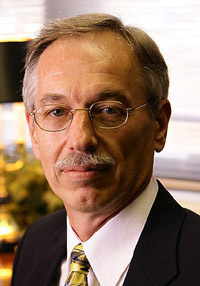 Thomas C. Corke, Clark Equipment Professor of Aerospace and Mechanical Engineering at the University of Notre Dame, has been named a fellow of the American Institute of Aeronautics and Astronautics (AIAA).

According to the institute, AIAA fellows are “persons of distinction who have made notable and valuable contributions to the arts, sciences or technology of aeronautics or astronautics.”

Corke will be honored May 11 at the AIAA Fellows Dinner in Arlington, Va., and again the next day at the Aerospace Spotlight Awards Gala at the Ronald Reagan Building and International Trade Center in Washington, D.C.

The founding director of Notre Dame’s Institute for Flow Physics and Control and director of the Hessert Laboratory for Aerospace Research, Corke specializes in the study of fluid mechanics. His research interests are in the area of fluid mechanics, specifically related to hydrodynamic stability, transition of laminar flow to turbulent flow, aeroacoustics, computational fluid dynamics, applied turbulence control, unsteady flows, wind engineering and atmospheric diffusion, and wind tunnel design.

In addition to this most recent honor, Corke is a fellow of the American Physical Society and the American Society of Mechanical Engineers. His research on plasmas has been emulated worldwide for flow control applications and includes a new type of plasma sensor designed for use in hypersonic Mach number, high enthalpy flows. He also is the author of “Design of Aircraft,” which has been adopted as the capstone design text in more than a dozen aerospace departments across the United States and in numerous programs around the world.

Corke earned his bachelor’s, master’s and doctoral degrees, all in mechanical and aerospace engineering, from the Illinois Institute of Technology (IIT). He joined the IIT faculty after completing his doctorate in 1981 and reached the rank of full professor before joining the Notre Dame faculty in 1999.

With more than 36,000 individual members worldwide, and 90 corporate members, the AIAA brings together industry, academia and government to advance engineering and science in aviation, space and defense.