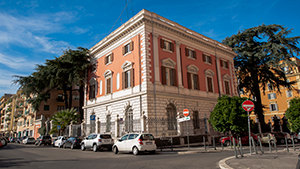 The University of Notre Dame has purchased a villa in central Rome to be used as a student residence hall for Rome Global Gateway programs.

The century-old building, quite new by Roman standards, is a city block away from the headquarters of the Notre Dame program at 15 Via Ostilia in Rome’s Rione Celio neighborhood on the slopes of the Caelian Hill. Scheduled for occupancy in the fall of 2017, it will house 100 Notre Dame students and a rector and residence hall staff.

“The purchase of the villa expands the horizon of possibilities both for the Gateway and for the longstanding Notre Dame architecture program in Rome,” said J. Nicholas Entrikin, vice president and associate provost for internationalization. “The University’s strategic and wise investment in the villa will greatly increase student and faculty opportunities for study and research in the heart of the Eternal City.”

Praising the newly acquired Roman building for its architectural significance, Michael Lykoudis, Francis and Kathleen Rooney Dean of Notre Dame’s School of Architecture, said that the facility “will have a profoundly positive impact on the lives of all architecture students, each of whom spends a full academic year in Rome as part of the required curriculum.”

Theodore J. Cachey Jr., academic director of the Rome Global Gateway, said that the new building’s location and historical significance were both noteworthy. “It was built in 1913 by the Duchess of Pontalto, and the family of the Count of Loschiavo lived there during the early 1900s,” he said. “When Italy’s racial laws led to the eviction of Jewish children from the Italian schools in 1938, the Jewish Community of Rome used it as a school. The Italian Military Police took up residence there from 1940 until recent times. It is inspiring to think that Notre Dame will be writing the next chapter of the history of the Villa on the Caelian Hill, one of the seven storied hills of Rome.”

One of the five Global Gateways worldwide (the others are in Beijing, Dublin, London and Jerusalem), the Rome Global Gateway serves as a hub supporting the academic, educational and cultural mission of the University. The Gateway also fosters research and graduate education and develops and maintains institutional relations with universities, educational foundations and organizations in Italy, Europe and the Mediterranean, as well as with the Holy See.