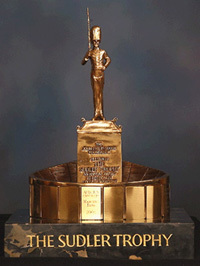 The University of Notre Dame Band has been awarded the 2011 Sudler Trophy, recognizing “collegiate marching bands of particular excellence that have made outstanding contributions to the American way of life.” The trophy was presented Dec. 17 during the Midwest Band and Orchestra Clinic in Chicago.

Dating back to 1982, the trophy, presented by the John Philip Sousa Foundation, is considered the Heisman trophy for college bands and recognizes Notre Dame’s contributions over numerous years. It is the only nationally recognized award for college marching bands, and only one trophy is awarded bi-annually.

A formal presentation of the Sudler trophy will be made at Notre Dame Stadium this fall at a home football game. Kenneth Dye, director of Notre Dame Bands, was on hand as Notre Dame was announced as this year’s recipient. 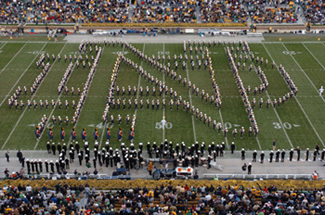 “I look for continued progress and success with the Notre Dame Band and wish to congratulate all the students, staff and supporters that have helped our program earn this recognition,” Dye said.

The Notre Dame Band, which includes more than 380 student musicians representing every field of study at Notre Dame, has earned a national reputation for its highly original and innovative performances. The band is the oldest college band (in continuous existence) in the United States and was honored as such by being declared a “Landmark of American Music” by the National Music Council and the Indiana Music Educators Association during the 1976 United States Bicentennial.

The band has played an active role in fueling the spirit of Notre Dame and recently celebrated the centennial anniversary of the “Notre Dame Victory March.” The fight song was first written in 1908 by two Notre Dame students and has maintained great popularity ever since its first performance in 1909.