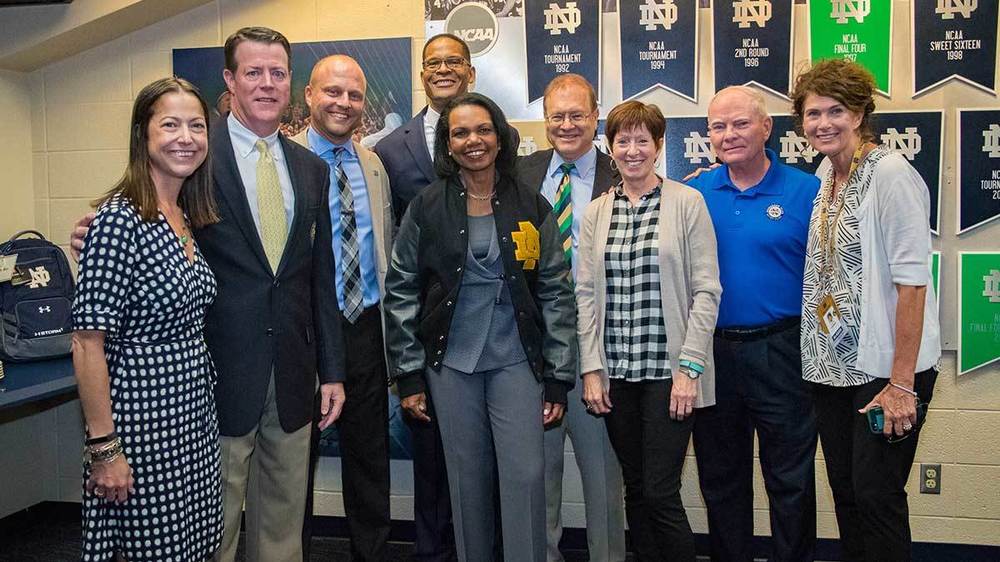 Former Secretary of State Condoleezza Rice, a 1975 graduate of the University of Notre Dame, recently received an honorary monogram from her alma mater in a surprise presentation on campus.

After speaking at the Sept. 1 ceremony to unveil a postage stamp honoring the late Rev. Theodore M. Hesburgh, C.S.C., Notre Dame’s president from 1952 to 1987, Rice addressed members of the Irish women’s basketball team in their team room at the Joyce Center.

After her remarks, she was presented with the honorary monogram in recognition of her support of the University, including service on the Board of Trustees.

“This is a program that achieves at a very high level,” Swarbrick said of the women’s basketball team. “They have an important symbol of when they have success. When they succeed in the classroom and when they succeed athletically, there’s a very special and unique honor they earn that they want to share with you.

“You represent the philosophy of our coach and this program so well. You said once, ‘We have to move past the idea that women can become leaders to the expectation that they will be leaders.’ That is what this program is built on and that is what these young women represent. They would officially like to make you a Notre Dame monogram winner.”

Rice was a member of Notre Dame’s Board of Trustees from 1994 to 2001 before stepping down when she was appointed national security adviser by President George W. Bush. She served in that role for four years before becoming secretary of state in 2005. She was the first African-American woman to serve as the nation’s top diplomat and remained in that position throughout President Bush’s second term.

Rice earned her master’s degree from Notre Dame in government and international studies. Prior to her service on the University’s Board, she was a member of the advisory council for Notre Dame’s College of Arts and Letters. She received an honorary doctor of laws degree and was the principal speaker at Notre Dame’s 1995 University Commencement Ceremony, and she joined President Bush on the platform during the May 2001 Commencement, when the president received an honorary degree and delivered the principal address.

Rice was President Bush’s primary foreign affairs adviser during the 2000 presidential campaign, and she served from 1989 to 1991 in the administration of President George H.W. Bush as director and senior director of Soviet and East European affairs in the National Security Council.

Rice earned her bachelor’s and doctoral degrees in political science from the University of Denver. She is a member of the Stanford University political science faculty and served as the university’s provost for six years in the 1990s. She has authored several best-selling books including “Extraordinary, Ordinary People,” “No Higher Honor” and “Democracy.”

Rice served on the College Football Playoff committee from 2014 to 2016.

The Notre Dame Monogram Club awards honorary monograms to people who have demonstrated a commitment to the betterment of Notre Dame athletics and the development of Fighting Irish student-athletes and graduates. Presidents Gerald Ford and Ronald Reagan are among past recipients of an honorary monogram from Notre Dame.