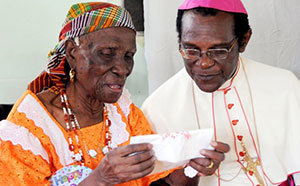 Archbishop Kelvin Edward Felix, emeritus archbishop of Castries, Saint Lucia, who will be made a cardinal by Pope Francis next month, is a graduate of the University of Notre Dame.

Archbishop Felix, who enrolled at Notre Dame in 1965, studied sociology and earned a master’s degree from the University in 1969.

A native of Roseau, Dominica, Archbishop Felix oversaw the West Indian dioceses of Castries in Saint Lucia, Saint George in Grenada, Roseau in Dominica, and Saint John Basseterre in Antigua and St. Kitts from 1981 until his retirement in 2008. He now lives in Dominica where he assists as a priest in several Catholic parishes.

All 19 of those whose names Pope Francis announced Sunday (Jan. 12) will be made cardinals during a ceremony on Feb. 22 (Sunday) at the Saint Peter’s Basilica in Rome.