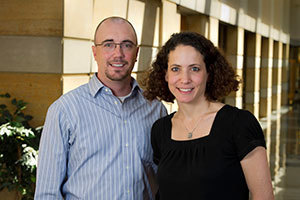 Peace scholars Atalia Omer and Jason Springs examine the interplay of religion and nationalism around the globe in a newly published reference book.

“Religious Nationalism: A Reference Handbook,” recently released by ABC-CLIO, is the latest volume in the publisher’s Contemporary World Issues series.

Geared toward students of religious studies, sociology, political science and peace studies, the book challenges a commonly held assumption that secular nationalism is “good” nationalism (or not “nationalism” at all), while religious nationalism — typically blending religion and politics — leads to explosive conflict, says Springs, assistant professor of religion, ethics and peace studies at the University of Notre Dame’s Kroc Institute for International Peace Studies.

“Religion informing politics does not necessarily result in destructive forms of conflict and violence,” he said. “It can intervene in ways that promote peace and justice.”

Often even political figures and institutions that profess to be wholly secular bear the signs of religious motifs, said Omer, assistant professor of religion, conflict and peace studies at the Kroc Institute. “It’s misleading to think of secular and religious nationalism as easily separable.”

Though scholarly interest in religious nationalism had been steadily increasing since the end of the Cold War, Springs said, the 9/11 terrorist attacks added a renewed sense of urgency to examining the issues it raises.

The two scholars, who happen to be married, met while earning doctoral degrees in the Study of Religion at Harvard University. They came to Notre Dame together in 2008 to join the core faculty of the Kroc Institute.

“Since our early days of graduate school, we have been trained in highly compatible and complementary ways,” Springs said. “This was our first time to write at length together, and we expect it won’t be the last.”