University of Notre Dame Glee Club members will likely always remember making the pilgrimage to the Cathedral of Santiago de Compostela in Spain — an 87-mile trip. On foot.

On May 20, about 50 undergraduate students flew to Madrid to begin a two-week tour of Spain. The Glee Club takes an international tour every two years, and this year Daniel Stowe, the group’s director, organized a trip to Spain. 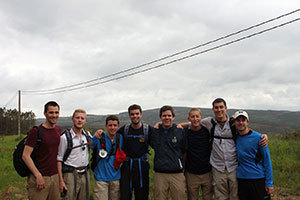 “A friend has recently retired to Spain, and he was wondering when I was coming to visit,” said Stowe. “He asked, ‘Do you guys ever do the Camino to Santiago?’ I thought, ‘No, but we could.’ I made some concert inquiries, and we were able to set up some wonderful performance events with the assistance of very gracious Spanish hosts.”

The highlight of the trip was spending a week walking the Camino de Santiago, a pilgrimage route through Spanish towns that ends at the Cathedral of St. James in Santiago de Compostela.

“We started in O Cebreiro, which includes the highest point on the French Way Camino west of the Pyrenees,” said Brian Scully, Glee Club president. “When we started the first day, we were so high up that it was snowing, even though we were walking during the end of May. We walked from this spot to Santiago de Compostela, about 140 kilometers (87 miles) in total.” 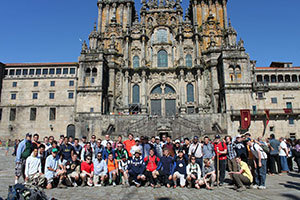 The Glee Club gathers in front of the Cathedral of St. James after finishing the Camino

Once the group arrived in Santiago, members prepared for a performance in the Cathedral of Santiago de Compostela. The Glee Club was the featured choir at the Pilgrim’s Mass on June 4 (Tuesday) in the historic cathedral that houses the relics of the apostle St. James. The group also gave a concert in the Church of San Francisco in Santiago. Members prepared a two-hour set of music for the occasion, Scully said. “Much of the music was from the Spanish tradition, such as the ‘Missa Ave Maria’ by Morales. One piece, ‘Congaudeant catholici,’ was first found in the Codex Calixtinus, a 12th-century manuscript giving details about the Camino de Santiago and advice for peregrinos, pilgrims on the Way.”

The Glee Club performed several concerts in packed churches around the northwestern area of Spain, in an area called Galicia. “With this in mind, we included two Galician folk songs in our concert set, ‘O voso galo’ and ‘Catro vellos mariñeiros.’ These songs were particularly successful, and we were met consistently with long standing ovations in the middle of the concert,” said Scully.

“Our concerts had fantastic crowds. Our cathedral concerts — such as León, Burgos and Santiago — were filled, with many people unable to fit in the full main nave seating and moved to additional seating in the cathedral side chapels. The size of the crowd was quite a sight to see from our perspective in these massive, historic churches. It was encouraging that so many people were willing to join us to celebrate music.” 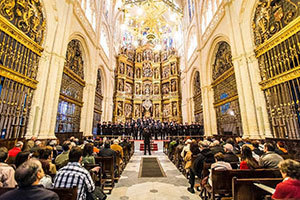 The Glee Club performs in Burgos Cathedral in Spain

While singing in a brief concert in the cathedral square after arriving at the Cathedral of Santiago de Compostela, a BBC film crew requested additional footage of the group for a documentary about the Camino.

“When we all had arrived in the plaza in front of Santiago Cathedral, we began an informal performance,” said Stowe. “A man came over to me and tapped my shoulder — it was Simon Reeve, the BBC travel documentary host, who asked if he could film us. He happened to be in Santiago that day as part of a documentary project on the world’s pilgrimages. We sang some songs for him and his crew; afterward we had a very nice interview chat, and we sold them several of our CDs. The program is scheduled to air in Britain in late summer and on BBC America in the fall.”

The trip wasn’t all concerts. The students took tours of the city of Madrid and the Prado museum, as well as an outing to the hillside city of Toledo and a trip to La Coruña during a “crucial soccer match,” Scully said. They also visited the beach at Cape Finisterre, where, it was once believed, the world ended. 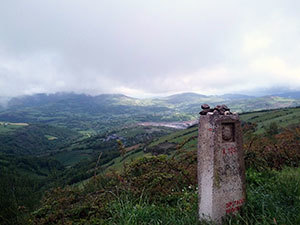 Stowe appreciated the opportunity to slow down on this trip and enjoy the country. “Our tours, both in the U.S. and abroad, are always little sips of culture, with only a couple days in each locale — enough to find our way around and see the major sights, but they merely whet the appetite for a more in-depth experience for those who are open to it,” he said. “It was so nice to be in one place long enough for a change to really get a sense of daily life there. And walking as the principal mode of transportation of course compels you to look around and absorb even more.”

For Scully, the most memorable part of the trip was the community formed among his colleagues. “The Glee Club is very much a social group as well as a singing group, and the members of the group often become very close friends. This tour gave us a great opportunity to grow closer as a group. The Glee Club has been my most direct experience of the ‘Notre Dame family,’ and that’s been greatly facilitated by time spent touring with my friends.”

Founded in 1915, the University of Notre Dame Glee Club performs more than 100 concerts each year in front of thousands of audience members. On campus, it is known and loved for its seasonal and Commencement concerts each year, as well as its Saturday performances before each Irish home football game.