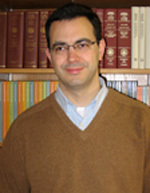 Though the recent collapse of the Greek financial system shook the European Union, that financial crisis was only a symptom of a much deeper issue, according to University of Notre Dame political scientist Sebastian Rosato, author of “Europe United: Power Politics and the Making of the European Community” (Cornell University Press, 2011).

“The EU has been going downhill for almost two decades now and is going to go even further downhill in the future,” Rosato says.

“The Europeans failed to build a military to challenge the U.S., despite lofty rhetoric to the contrary; they failed to pass a constitution; and they have been slowly eviscerating the single market and single currency. Simply put, the European Community’s best days are long gone and there is worse to come.”

Rosato explains that the European Union was created with a very specific purpose in mind: protection against the Soviet Union. Consequently, “when the Soviet Union died in 1991, that fundamental purpose disappeared. No Soviet Union, no EU required. The entire European order is collapsing around us,” Rosato says.

Media advisory: Professor Rosato’s comments may be used in whole or in part. He is available for interviews and can be reached at 574-631-0378 or srosato@nd.edu